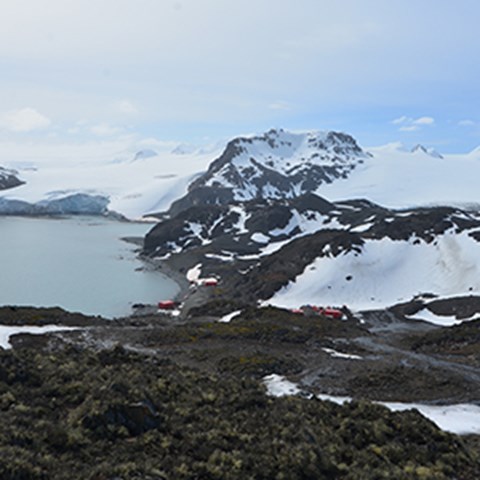 Overview of Livingston Island with the Spanish research station Juan Carlos I in the back. The lichen samples for this study were collected here. Photo: Claudia Colesie

Short periods of increased temperature can push Antarctic lichens to their physiological limits and therefore cause a sever survival threat. This is the result of a study from an international research team that analysed the acclimation potential of several Antarctic lichen species.

Claudia Colesie, lead author of the publication and postdoctoral researcher at SLU, and her colleagues concluded that increased temperatures will influence future species composition in the Antarctic vegetation and lead to a species loss. Their study is published in the journal Global Change Biology.

In recent years, the Antarctic Peninsula has experienced fast regional climate change. The vegetation in this extreme environment is dominated by lichens and non-vascular plants, such as mosses. The team, comprising of researchers from Sweden, Germany and New Zealand/Spain, wanted to understand how lichens respond to increasing temperatures in order to assess the risk of global warming for the vegetation on the Antarctic Peninsula.

- The Antarctic Peninsula serves as an early warning system for the effects of climate change on species and ecosystems, explains Claudia Colesie.

- In our study we show that 15°C mark the upper limit for Antarctic photobionts to survive in the lichen symbiosis.

The temperature-driven effects on the lichens energy balance varied between different species. For example, one species endemic to the Antarctic and the southernmost parts of South America could not acclimatise to increased temperatures and the photobiont died.

On the other hand, a wide spread lichen species, which does not only occur in the Antarctic but also in alpine and arctic environments, could recover its energy balance when exposed to higher temperatures.

- This lichen species was considered to have a broader ecological amplitude, i.e. the limits of environmental conditions within which the organism can live are wider. We did not at all expect to see this fast rate of acclimation to higher temperatures, says Claudia Colesie.

- Based on these results, we suggest that species with a higher physiological plasticity will be favoured with ongoing temperature shifts in the Antarctic. The consequential homogenisation of the local vegetation becomes an additional threat for this pristine environment, with severe influences on the function and productivity of the ecosystem.

Studies on acclimation processes in Antarctic organisms and the corresponding risk assessments are particularly useful to predict the effects of global warming because colder climates are more responsive to increased temperatures than warmer regions.

Overview of Livingston Island with the Spanish research station Juan Carlos I in the back. The lichen samples for this study were collected here. Photo: Claudia Colesie