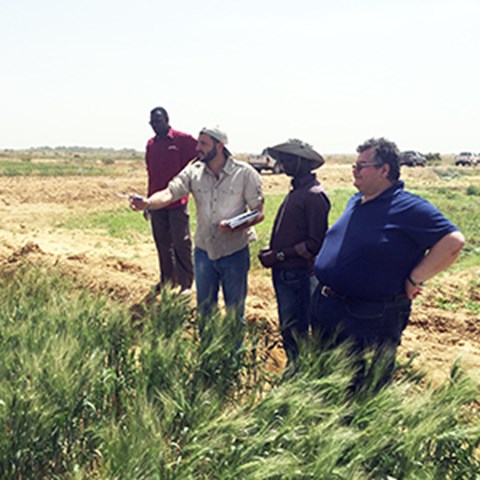 Inspection of a durum wheat field. Rodomiro Ortiz to the right. Photo: SLU

Today there are durum wheat varieties that can be grown on the savannah along the Senegal River during the four months of the year when temperatures reach 35-40 degrees (°C) and it is too hot to grow other crops. Behind these new varieties are plant breeder Filippo Bassi from ICARDA and geneticist Rodomiro Ortiz from SLU. Now they have been awarded an international food safety prize for their work.

"A 'crazy idea' has resulted in the ability to grow durum wheat in the extreme heat of famine-affected Senegal, Mauritania and Mali, potentially boosting the income for 1 million farming families." This is the statement that explains the choice of the winner of the 2017 Olam Prize for Innovation in Food Security.

In this region, farmers grow rice for 8 months a year, while the land remains unproductive for the other 4 months. The new durum varieties have been developed to grow very fast and to tolerate high temperatures, allowing farmers to grow durum wheat between rice seasons. In this way 600,000 tonnes of new food could be produced, corresponding to 175 servings of pasta per person per year, in the region, which would also generate significant extra incomes for the farmers. As the wheat contains 5 times more protein than rice, as well as vitamins and minerals, it will also help to improve diets.

The basic research that made these achievements possible was done within a project that was led by Professor Rodomiro Ortiz at SLU in Alnarp and financed by the Swedish Research Council.

The actual plant breeding work was led by Rodomiro Ortiz and Filippo Bassi (International Center for Agricultural Research in the Dry Areas), and conducted in cooperation with research institutes in Mauritania (CNARADA), Senegal (ISRA) and Morocco (Mohammed V University). The germplasm will be shared freely with developing countries, which means that the discovery also has wide adaptation potential for other areas hit by increasing temperatures.

"Now we need to help create a route to market, so we will be using the prize fund to foster the establishment of a commercial partnership with the North African pasta and couscous industry", said Filippo Bassi in the press release.

The prize (50 000 US$) is awarded by Olam, a large agri-business with operations in 70 countries, and Agropolis Fondation, a foundation that supports research in agriculture and sustainable development.

Press release from Olam about the price (November 16, 2017)
http://olamgroup.com/news/italian-scientist-brings-pasta-power-climate-adaptation-solution-west-africa/