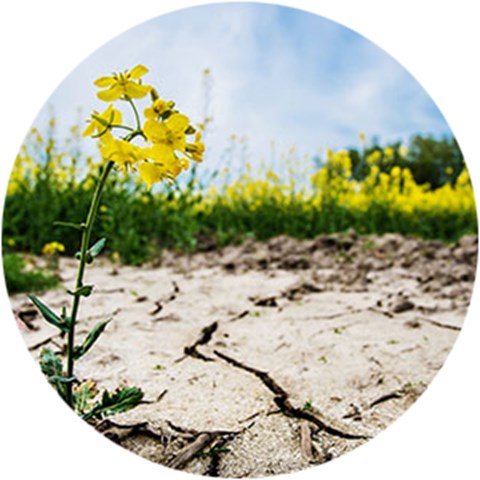 The webinar Climate Change Challenges and Ways Forward for Land Use is part of a series of open seminars and internal scientific dialogues on climate change held by SLU during 2021 and 2022.

The role of land use for climate mitigation and adaptation was in focus when scientists from the Swedish University of Agricultural Sciences, Lund University and Independent University Bangladesh met in a research dialogue on Climate Change.

The webinar Climate Change Challenges and Ways Forward for Land Use is part of a series of open seminars and internal scientific dialogues on climate change held by SLU during 2021 and 2022. The open seminar on October 18 centred around the sixth assessment report by the UN Climate Panel IPCC (Intergovernmental Panel on Climate Change) released on August 9, 2021. The report AR6 Climate Change 2021: The Physical Science Basis addresses the physical understanding of the climate system and climate change.

Focus on synergies and goal conflicts

Markku Rummukainen, professor of Climatology at Lund University and Sweden’s representative in the IPCC panel, presented some of the key findings in the report which concludes that the recent changes are widespread, rapid and intensifying and that human activities are causing climate change and making extreme climate events more frequent and severe. Unless there are immediate, rapid and large scale reductions in greenhouse gas emissions, limiting warming to 1.5󠇛 degrees Celsius will be beyond reach.­­­­­

– There’s no going back from some of the changes in the climate system, but others could still be slowed or stopped by limiting global warming, says Markku Rummukainen.

Regarding land use and science on climate change, he would like to see more focus on synergies and goal conflicts when it comes to land management.

– Nature based solutions and restoration of ecosystems are increasingly acknowledged to provide for climate mitigation and adaptation, he says.

A new era of loss and damage

One of the lead authors for several of the IPCC reports has been Saleemul Huq, director of the International Centre for Climate Change and Development (ICCCAD) and professor at the Independent University Bangladesh (IUB). As an expert in adaptation to climate change he gave some insights into the work of the IPCC.

His research focuses on community based adaptation by vulnerable communities in developing countries.

– Bangladesh is one of the most vulnerable countries in the world, regularly hit by floods and cyclones. We have produced a lot of knowledge on climate adaptation and are now learning how to cope and become more resilient, he says.

A need for cross-disciplinary research on climate communication

Kristina Blennow, professor of Landscape analysis at the Department of Landscape Architecture, Planning and Management at SLU, talked about the role of local knowledge and communication in climate change adaptation and mitigation.

She explained the concept of “tipping point thinking”, which means that a person thinks that the (relevant part of the) earth system has passed a tipping point regarding climate change. For him or her there is no use to take measures to adapt, since it would not make any difference.

She concludes that there is a need for cross-disciplinary research focusing on both local bio-geophysical aspects and behaviour. We need to identify the drivers and strategies of decision making favouring adaptation to the impacts of climate change to make it possible to identify communication needs for different groups of people.

–The new knowledge on communication needs can be used to develop evidence-based guidelines for effective climate change communication,  says Kristina. It’s important to consider what people believe and expect for the future as this provides opportunities to design communications that meet  needs. The content of the communication must be adapted to the audience, and we need to do research on who needs what.

Potential for climate mitigation in the land use sector

Erik Karltun, researcher at the SLU Department of Soil and Environment, explained how land can be used as a carbon sink in Sweden. He is a member of a team that compiles the Swedish reporting of green-house gas emissions and uptake from land-use.

– There is a lot of potential for climate mitigation in the land-use sector. The carbon sink from Swedish land-use, like agriculture and forestry, balances out 70 percent of anthropogenic greenhouse gas emissions from all other sectors, even when all emissions from bioenergy have been accounted for, says Erik Karltun.

– The Swedish forest sector provides an example of how much sustainable production forestry can contribute to mitigation of climate change. We can see similar developments in low-income countries when productive forestry is growing in response to increased market demand for tree-based products and bioenergy, he says.

The webinar Climate Change Challenges and Ways Forward for Land Use is part of the SLU Climate Conversations, a series of high-level research dialogues taking place during 2021 and 2022. The aim is to address the latest IPCC report, encourage cross-disciplinary conversation and link research with policy development. The dialogues are arranged by SLU Global and the four interdisciplinary SLU Future Platforms: SLU Future One Health, SLU Future Food, SLU Future Forests and SLU Urban Futures.

Climate Change Challenges and Ways Forward for Land Use