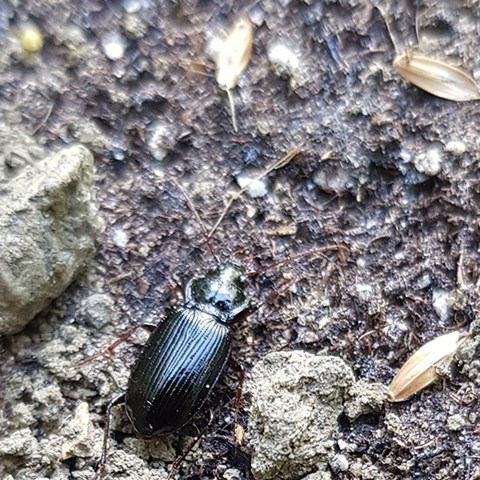 Many small rodents and carabid beetles like to eat weed seeds and we benefit from that in agriculture. New research at SLU shows that these seed predators can reduce the population of weeds - in this case black grass. Although the farmer uses chemical and mechanical methods to control weeds, seed predators are an important complement. They become even more important with increasing abundance of herbicide resistant weeds and phasing out of herbicides. Therefore, we must ensure that seed predators thrive in agricultural landscapes.

“The benefits of ecosystem services such as pollination and natural enemies of pests are well known, but seed predators have not received as much attention. We show that they have a great potential for controlling weeds”, says Eirini Lamprini Daouti researcher at SLU.

The most important result of the study, recently published in the Journal of Applied Ecology, is that seed predators have a major impact on the reduction of weed populations of annual weeds.

“We chose to look at black grass because it is a common and troublesome weed that causes significant crop losses in Europe”, says Alexander Menegat, researcher at SLU.

The researchers have created a life cycle model of black grass and calculated that at least 78 percent of the seeds must be eaten for preventing the weed population from growing. The model is based on data from a long-term field studies in winter wheat fields in southern Sweden..

“To find out how much the seed predators ate, we put out pads with seeds on them. We also investigated which group of seed predators  were most important by excluding rodents from some of the seed pads by using a metal net cage, says Eirini.

It turned out that an average of 89 percent of the seeds were eaten by all seed predators. in July when the pressure was greatest (enough to influence the population) In the middle of the summer, the rodents were the most important seed predators and later, around harvest time, carabid beetles  were most important. However, predation by both groups of predators is essential to reduce blackgrass population growth.

Farmers benefit from seed predators but it is difficult to directly use it on an individual field. Researchers, farmers and policy-makers need to evaluate various practices to enhance predator abundance and diversity, for example increased crop rotation diversity, reduced field management intensity and enhanced landscape heterogeneity.

“Seed predators are important for today's intensive agriculture and they become even more important in an agriculture that is more adapted to ecological principles”, says Alexander Menegat.

Part of a thesis

The article is included in Eirini Lamprini Daouti´s PhD thesis. In the thesis she also found: