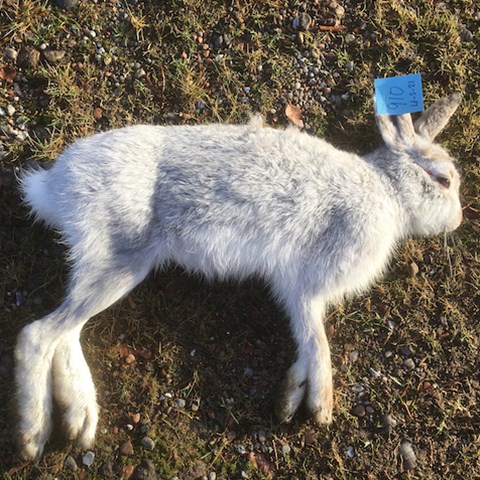 The heath hare is a subspecies of mountain hare (Lepus timidus) that is unique to southern Scandinavia and western Estonia. Instead of the white winter pelage that is typical for boreal/arctic mountain hares it has a gray/blue winter pelage that occasionally may be seen in arctic foxes. It is generally believed that this form of winter coloration is a specific adaptation to the less reliable snow coverage in southern Scandinavia. The distribution of heath hares to however overlap with that of the non-native brown hare (Lepus europaeus), which seem to outcompete mountain hares wherever it occurs. Thus, we have a uniquely adapted mountain hare subspecies that risk going extinct.

Knowledge of the genetic basis for certain traits is important for the understanding of specific adaptations. Therefore, the first whole genome sequences from three heath hares (blue winter pelage) were acquired along with those of two specimens of the nominate mountain hares (white winter pelage) and two brown hares (brown winter pelage). Rather surprisingly, the genome of the heath differed notably from the nominal mountain hares, despite the thousands of years of coexistence, demonstrating that the subspecies difference is not restricted to local adaptation but represents a unique, old evolutionary lineage. This suggests that the heath hare colonized Scandinavia from the south after the most recent ice age whereas the contemporary mountain hares probably arrived later from the northeast.

Future research will hopefully shed light onto the geographic origins of the two subspecies. In addition, the genome sequences are useful to screen genetic variation that could be used for investigations of genetic differentiation and local adaptations. Hopefully these sequence data will provide management with tools to assess the conservation status of the unique heath hares.

The results are published in Scientific Data. The research was financed by the Swedish Environmental Protection Agency