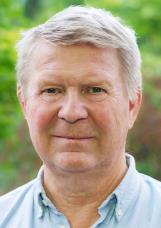 Ulf Magnusson is a licensed Swedish Veterinarian, Diplomate of the European College of Animal Reproduction and is holding a position as professor of Animal Reproduction at the Department of Clinical Sciences at SLU. UM's current research activities deals with infectious diseases in livestock that affects reproduction and might be transmissible to humans (zoonotic). The latter holds also true for his work on antimicrobial resistance. UM has a broad international network and most of his research is conducted in low/middle-income countries in Asia and Africa. He is teaching veterinary students in large animal reproduction.

Professor of Animal Reproduction at the Department of Clinical Sciences, SLU

Leader for the Animal health- “Flagship” activities within the CGIAR program  “CRP Livestock”, 2017-

Member of the Steering group for the CGIAR Antimicrobial Research Hub, 2019-

Dr. Magnusson started his research career in the fielsd of clinicl immunology mainly related to infections in large animals' reproductive organs. Then UM moved into reproductive toxicology related to environmental pollution and endocrine disruptors. That work inculded  experimental studies in the domestic pigs and field studies in the wild mink .

During the last decades UMs research focus is on zoonotic diseases  in livestock as well as animal husbandry  practices that affects animal's reproductive performance. This work combines  microbiological/physiological data with human behavior/practises data. The latter do also apply for his recent work on antimicrobial resistance. These current research activities are mainly conducted in low-income countries. Some of UMs' research do also deal with food security and the UN sustainable development goals in an overarching perspective.

Dr. Magnusson  has been PI/coordinator for external grants (majority in direct competition) worth about 20 MEURO.

Dr. Magnusson has extensive research and academic training cooperation with colleagues at universities in Asia and Africa over the years: In Tajikistan UM is cooperating with Tajik Agrarian University and Tajik Academy of Science. In Thailand with Chulalongkorn University and Khon Kaen University. In Vietnam with Cantho University, Nong Lam University and Hanoi University of Agriculture. In Cambodia with National Veterinary Research Institute, National Institute of Public Health and CelAgrid. In Uganda with Makerere University and in Ethiopia with Addis Ababa University.

Over the years UM has through PhD-training activities established close cooperation/contacts with colleagues at the veterinary faculties/academies in Tartu, Estonia; Jelgava, Latvia; Kaunas, Lithuania; Vitebsk, Belarus and St Petersburg, Russia.

He is also engaged in various ad hoc animal health tasks for the FAO, OIE, World Bank and EC.

Following his graduation as a veterinarian, UM worked some years in large animal practice and in meat inspection at various locations in Sweden. Then he came back to SLU and and took on PhD-studies on the immune response in the sow around parturition combined with teaching in large animal obstetrics and work at the SLU ambulatoric clinic. After his PhD he did a postdoc at University of Guelph on immunogenetics in pigs. Upon return to SLU, UM was given a position as assistant professor and earned the title "docent" (associate professor) after some years doing reaserach in the field of clinical immunology in farm animals. In parallel he was holding a position as director of postgraduate studies for the Veterinary Faculty, SLU. Then he became the first director for the Centre for Reproductive Biology in Uppsala, CRU. Where he among other things managed coordinate a successful grant application to the Swedish Environmental Protection Agency involving some 10 senior scientist from 4 Swedish universities. The program - ReproSafe - ran for 5 years and dealt with environmental reproductive toxicology and reasulted in some 10 new PhDs in the field. Following the work as director of CRU, he took on the responsibilty as vicedean for research, research training and international cooperation in the new Faculty for Veterinary Medicine and Animal Science at SLU during two election periods, 6 years in total. He has also served 6 years in the examination committee for the European College of Animal Reproduction  (ECAR) including one year as chair.

Past management and evaluation commitments in brief

Member of the standing committee for the Association of Institutions for Tropical Veterinary Medicine AITVM   2007-2018 (President 2013-2016).Vice President of the European Society for Domestic Animal Reproduction  ESDAR – 2013-2018 for an exchange programme with Estonian, Latvia and Lithuania in the field of animal reproduction, 1999-2005; Member of the Swedish Board of Agriculture’s Animal Health/Biosecurity Council 2005-10; Member of the Swedish Governments FAO-committee 2005-2011; Member of Sida/SAREC/FORSK reference group for the Swedish support to the CGIAR system 2006-2016;  Expert in the  Swedish Governments’ commission on Livestock Contagious Diseases, 2008-10; Coordinator for a Sida-funded programme on restructuring the Veterinary Services in Tajikistan, 2008-2010; Vice programme manager for the research initiative “Future Agriculture – livestock, crops and land-use” at SLU, 2009-2011 (2012- 2014 member of the steering group); Coordinator for a Sida-funded programme on postgraduate training exchange with Makerere University, Uganda, 2010-2015

In addition he has been and is serving as assistant supervisor for several PhD-students at various universities and has been the principle supervisor for some 20 vet students exam work/MSc theses.

Over the years UM has arranged some 15 PhD-courses/summer schools in Sweden, Europe and Asia on animal reproduction and infectious diseases as well as reproductive toxicology.

(all papers by UM in PUB MED are founde here!).

Selected Other reports since 2007

Lundström J, Albihn A, Gustafson G, Bertilsson J, Rydhmer L and Magnusson U 2009. The farm animals in a changing environment – challenges and knowledge gaps. Overview of the Swedish Animal Management’s dependence on and effects on climate and environment. Faculty of Veterinary Medicine and Animal Science, SLU and the National Veterinary Institute, ISBN978-91-86197-08-7.