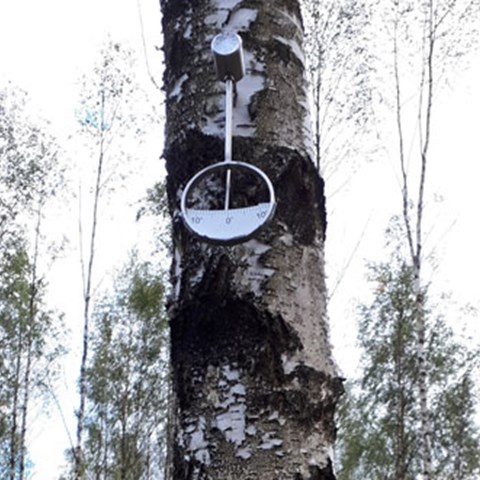 SEEING THE WOOD THROUGH THE TREES, WHILE THEY ARE STILL STANDING! Estimating wood density and stiffness of birch trees with modern tools.

Swedish mills processing birch often import it from other European countries while local supplies usually come with substandard quality as a result of the existing forest management practices favouring softwoods. Grace Jones at Linnaeus University is using modern testing technologies to estimate stem and wood qualities before harvesting, and at younger ages, to help Skogforsk's breeding program find the best birch trees earlier. Her work is part of the FRAS research group aiming to improve silviculture in southern Sweden.

The main use for Swedish birch is for paper, pulp, and firewood production, which assumes that the trees are of too poor quality for use in buildings and furniture. Sawmills want high stiffness and density for timber products, so most Swedish mills import birch wood to meet their needs. Sweden's forests are 10% birch trees, so a better understanding of the wood properties of this resource as well its improvement with appropriate silviculture and genetic tools would be of great value for the sawmilling and woodworking industries. Non-destructive methods applied on standing trees for estimating wood properties such as stiffness and density could help solve this shortfall, while also improving the quality of birch produced in Skogforsk's breeding programme.

Doctoral student Grace Jones and Prof. Stergios Adamopoulos, from Linnaeus University, have been working with Skogforsk and Mateusz Liziniewicz to measure birch trees from a family trial in Southern Sweden. Skogforsk initially planted 2400 trees from 28 Silver birch families at Hyssna and Brunsberg in 1999. Jones visited both sites to measure stiffness and density of 880 trees, representing 22 families and 20 trees per family per site. After spending all of September in the field, Jones is now analysing the measurements for differences in wood properties between densities, trees, families and sites.

Sampling is far less destructive if standing trees can be ranked for stiffness and density, and here this was possible using the 'Fakopp TreeSonic timer' and the 'Pilodyn penetrometer'. The Fakopp tool estimates wood stiffness by measuring the time taken for a hammer hit to travel between two metal probes along the tree's stem. Other researchers have already measured density on standing birch using the Pilodyn tool, but the Fakopp tool had not previously been used on Swedish birch. Jones expects that there will be some differences between family groups, but it is too early to know which families (if any) are best. Stiffness is important for both furniture and structural timber manufacturers.

Jones is hopeful that her work will help ranking trees for value-added wood conversion, and help decide which families Skogforsk should include in further breeding work. Wood density is already used by Skogforsk to find the best trees in family trials, but if higher stiffness can also be bred for, Swedish sawmills could start using more locally sourced birch trees with favourable properties. If Swedish birch management focusses on trees with better wood properties, the 10% of forests which are birch could be used to supply local sawmills instead of pulp and firewood producers. This would mean that Swedish birch generates more revenue, and sawmills could reduce how much birch they import.