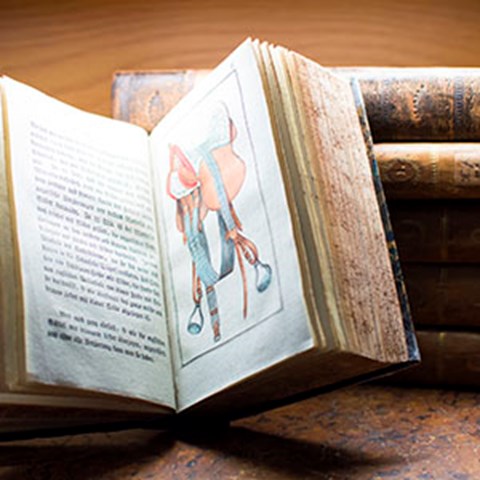 This collection is the most extensive of the two. It is chronologically set with annual signs and occupies the left long wall and the foundation wall. Among the dozens of works from the 16th century the following are to be noted: Johannes Ruellii (1474-1537) "Veterinariae medicinae libri duo", Paris 1530, and "Viehartznei", by unknown author, Frankfurt 1559.

The first book in Swedish of veterinary interest is printed in Stockholm in 1647 with the title "Een nyttigh läkiarebook för alla them som hästar hafwa til at sköta". Our copy is set together with Martin Böhmes (1559-1636) "Een ny och ganska nyttigh läkiarebook om häste läkedomar", Stockholm 1648. Böhme was an illiterate German student (farrier and horse physician). The Swedish translation of his little book was also published in a second edition in 1692. Of this edition the SLU University library has no less than four copies. Every copy has traces of diligent study and use of their previous owners, which were probably mostly farriers, former veterinarians.

The French horse doctor Philippe Etienne Lafosse (1737-1820) and his "Cours d'Hippiatrique", Paris 1772, is a volume that a bibliophile should spend a few minutes during the visit to the Historical Collection. Indeed, this magnificent volume in folio format seems to be unprecedented in veterinary medicine as a book piece. When you see the lavish copperplates, you understand why the publishing of the work ruined the author.

The historical library collection from the Agricultural University College covers all its literature printed until 1800 and the most interesting books from the 19th century, which originate from the Ultuna lanbruksinstitut.

The oldest book of the current Ultuna library is Varros "De agricultura" and Catos "De re rustica", Basel 1521. Various notes show that the book is a war trophy from Braunsberg in Ostpreussen. Before it was acquired to the Ultuna library in 1959, it belonged to the court jeweler and collector Christian Hammar (1818-1905) according to one of three exlibris.

Among the interesting 17th century works, one notice a well-thumbed copy of the German clergyman Johannes Coleri (1639) "Oeconomia", translated and "amplified" by his East German colleague Isak Erici (1576-1650), and printed in Stockholm in 1686-94. Of course, one should also get acquainted with some of the many 18th century classicals in Swedish farm management, such as the landlord Carl Gustaf Boijes (1697-1669) "The Swedes Country Housekeeper", Stockholm 1756, the prost Reinerus Reineri Broocmans (1677-1738) " House Holly Book "Norrköping 1736, Carl Carllesons (1703-1761)" Hushålslexicon ", Stockholm 1756, economy lecturer Karl Dahlman Eskilsson (1760)" Swenska landthushålning ", Stockholm & Uppsala 1745, and the writer Johan Fischerströms (1735-1796) "Economic dictionnaire", Stockholm 1779-92, which did, not quite unexpectedly, ceased with the letter C.

The historical library collection from the Agricultural University College also includes journals. You can find documents from Vetenskapsakedemien 1739-1806 in semi-French but neat bands, and the "Hushållnings journal" 1777-89, the latter suite unfortunately with gaps. Both of these pioneers in Swedish scientific journal publishing contain as known many of the articles of agricultural scientific interest.

The ceiling paintings in the room

The ceiling paintings in the room where the historical collection is found can be partially admired from the outside. They are made by Ronny Reyman in tempera on birch wood. In the three vaults, the artist alludes to the activities of each of the former three faculties of the University of Agricultural Sciences. He extracted inspiration for the artwork from some of the books in the room.