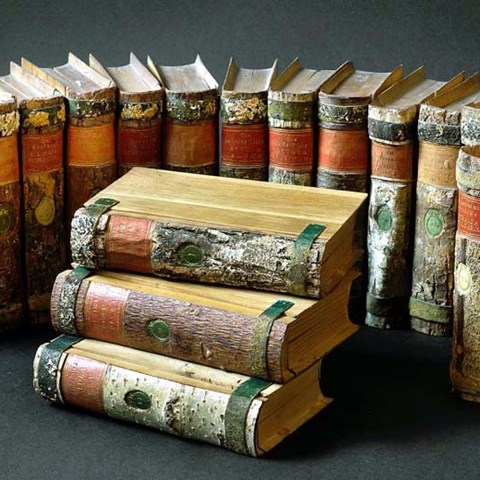 The Wooden Library in Alnarp is a unique collection of "books", each part describing a certain species or variety of tree or shrub. The collection consists of 217 volumes and was made in Nürnberg in Germany ca. 1805-1810.

Wooden libraries - or xylothek, from the Greek words for tree (xylon) and storing place (theke) - flourished for a short period in history, around 1790-1810, mainly in Germany. They were a further elaboration of the cabinets of natural curiosities that was common during the 18th century, and consisted of simple pieces of wood specimens placed together in some kind of cupboard. In a refined form it took the shape of "books" where you could find details from the tree inside and arranged as a "library".

Each "book" describes a certain tree species and is made out of the actual wood (the "covers"). The spine is covered by the bark, where mosses and lichens from the same tree are arranged. "Books" of shrubs are covered with mosses with split branches on both covers and spines.

Inside there are dried leaves, flowers, fruits, seedlings, a piece of the root, cut branches, seeds - similarly arranged in every "book". In a compartment inside the spine lies a delicately written description of the tree, its biology and its practical use.

We know the names of four different manufacturers of wooden libraries. Three of them put their works up for sale, often on a subscription basis. The wooden library in Alnarp is an example of that. The collection was made in Nürnberg, Germany during the first decade of the 19th century by Friedrich Alexander von Schlümbach and Johann Goller. Nine different collections of their hands are known from Germany, Hungary, the Netherlands and Sweden (Alnarp). The Alnarp collection is by far the largest known of these and the only one covering more than 200 different species.

The collection came to Alnarp in 1952 as a donation from Per August Sandgren, a gardener and a attender of one of the first courses in gardening at the Alnarp Institute in the 1880's. He had purchased the collection in Germany in the early 1920's.

Film about the the wooden library