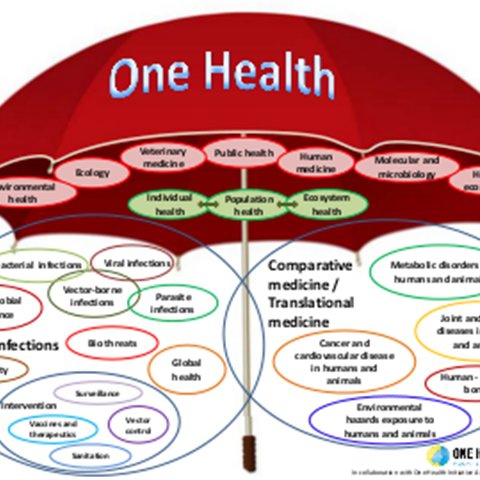 Today, microbial infections are still a major reason for morbidity and mortality in humans. To meet the future challenges of emerging and re-emerging infections we must move further towards the context of One World – One Health.

This concept is a world-wide strategy for expanding interdisciplinary collaborations and communications in all aspects of health care for humans and animals. The synergy achieved will advance health care for the 21st century and beyond by accelerating biomedical research discoveries, enhancing public health efficacy, expeditiously expanding the scientific knowledge base, and improving medical education and clinical care.

What is a zoonosis?

A zoonose is a disease (caused by virus, bacteria or parasites) transmissible from animals to humans and are the cause of many of our serious public health problems. The reverse situation (transmission from human to animal) is known as antroponosis.

The changing global arena, with an increasing human population, growing numbers of domestic animals and decreasing biodiversity facilitates the introduction of zoonotic pathogens and diseases.

One Health for Human Health Clinicians