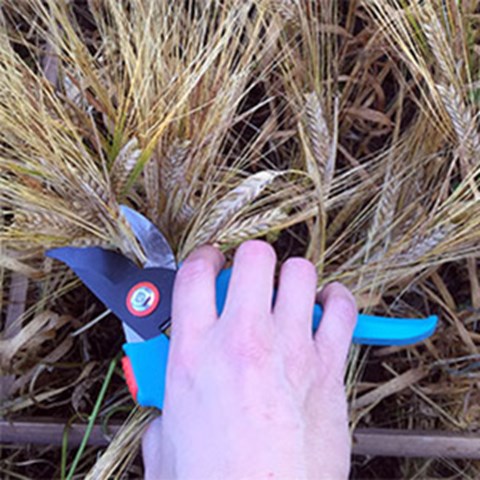 In the mid-1990s a program for an area representative monitoring of Swedish arable soils was initiated, financed by the Swedish Environmental Protection Agency.

According to environmental quality goals set up by the Parliament the program shall describe the current status of Swedish arable land, as well as the quality of crops in relation to the status of the soil, management measures and type of farming.

Samplings during the years

Since 2001 the program includes 2000 sampling points, with positions established with GPS, evenly spread over Swedish arable land. In the 1990s 3000 other sites were sampled, but the coordinates of these were unfortunately not established accurately enough to permit a re-sampling. At each single new sampling point the top soil (0-20 cm) is sampled every 10th year. If the crop in the year of sampling is winter wheat, spring barley or oats a grain sample is also taken. At each site a one- time sampling of the subsoil (40-60 cm) has also been made.

The soils are analysed

The topsoils are analysed for total carbon and nitrogen, carbonate carbon, pH, exchangeable cations (Ca, K, Mg, Na and acidity–from which cation exchange capacity and degree of base saturation is calculated), plant nutrients (ammonium-lactate acetate extractable P and K, 2M HCl extractable P and K) and trace element concentrations. For estimation of phosphorus adsorption capacity ammonium-lactate acetate extractable Al and Fe were also determined in the latest sampling round. In the two first sampling rounds trace metal concentrations were also determined. The grain samples are analysed for the major macro nutrients and the most important trace elements. On the subsoil samples from the new sampling points only texture has so far been analysed. From half of the sites sampled in the 1990s subsoil analyses of pH, trace elements and P-HCl are available.

Data from the Soil and crop inventory

Data from the Swedish National Soil and crop inventory can be found and downloaded at Miljödata MVM – en webbtjänst med mark- och miljödata. Maps of all measured parameters are available at the page Kartor (Eng. Maps).

Maps of the Soil and Crop Inventory