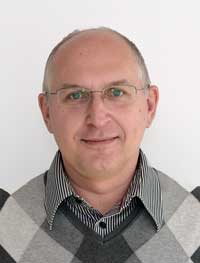 Professor of Inorganic Chemistry and Bionanotechnology.

Vadim G. Kessler graduated with honours from the Moscow State University (MSU) in 1987 and obtained there his Ph.D. degree in inorganic chemistry in 1990. He was appointed an Assistant Professor at the Department of Inorganic Chemistry MSU. He has made his postdoc on a half-time basis as an Associate Researcher at the X-ray Crystallography Center of the Russian Academy of Sciences in 1990-1991.

He has then spent his first sabbatical year (1992/93) as an associate Researcher of CNRS at the University of Nice with Prof. L.G.Hubert-Pfalzgraf and became an Associate Professor at MSU in 1995. The second sabbatical year, 1995/96, he worked as visiting scientist at the University of Stockholm and moved finally to Sweden appointed an Associate Professor at the Department of Chemistry SLU in Uppsala in 1997.

He received there his Habilitation Degree in 2000 and was promoted to Full Professor at the same University in 2004. He received in 2003 the International Donald Ulrich Award “For Excellence in Sol-Gel Science” and became a member of the Advisory Board of the Journal of Sol-Gel Science and Technology in 2006.

An illustration of the research strategy – from determination of molecular mechanisms – to advanced applications in biomedicine and agriculture.

Vadim's teaching interests are rather broad – he burns for explaining the physical chemical principles of the world around us at all levels – from High School to Advanced Professional level.