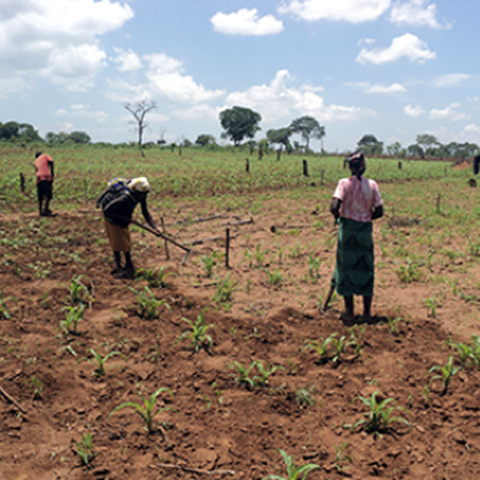 In order to meet the food demand of a growing world population, agriculture needs to be intensified in a sustainable way. However, small farmers in sub-Saharan Africa face many barriers to increase crop productivity. SLU and CIMMYT have compiled results from various research projects that show what is most effective to do, taking into account labor demand and returns.

With an increasing world population, the need for nutritious food, feed, fiber and fuel increases. The problem cannot be solved simply by increasing the amount of land being cultivated. Increased harvests are also needed, but the intensification of agriculture must be sustainable. Small farmers in sub-Saharan Africa face many barriers to increased productivity. One of the obstacles is the lack of labor during important periods. This can, for example, lead to delayed sowing so that the plants cannot utilize the entire growing season, or delayed weed control which leads to great competition from the weeds.

Some recommended methods are less suitable

A number of different cultivation methods have been advocated for sustainable intensification of plant production, but in many cases small farmers have not followed the advice. SLU and CIMMYT (International Maize and Wheat Improvement Center) have investigated why.

- We suspected that labor shortages in the farms and low labor productivity of some of the recommended methods may be the reason why the advice was not followed. We have therefore investigated the relationship between yield effects and labor needs for a number of methods that are proposed for sustainable intensification of maize production in small farms in different environments in sub-Saharan Africa, says SLU researcher Sigrun Dahlin.

Delayed or poor weed control has a major impact on yield. This field has the same crop history, plant density and fertilization but the left part of the field has not been cleared of weeds due to labor shortages. Photo: Sigrun Dahlin.

In SLU and CIMMYT's study, 24 publications were reviewed that reported on both the yield effects in maize and labor demand. The studies presented l measures in land preparation that can increase the availability of water in the soil (for example, the creation of embankments, planting pits or plow-free cultivation compared to conventional plowing or chopping) and cultivation systems that can reduce diseases and pests and increase soil fertility through biological nitrogen fixation.

Ridges and herbicides increase yield and save labor

The methods tested showed very varying results between the studies, from increased to reduced work productivity. It shows that some of the methods work better than current practice in some conditions but worse in others. Growing in so-called planting basins meant hard manual labor and yielded significantly lower crop yields relative to the work effort in the current studies. However, other studies from drier areas have shown a greater increase in harvest, but these lacked information on labor demand and could not be included in the analysis.

Systems with ridges (which can both increase water supply and provide mechanical weed control) and herbicide use, on the contrary, gave increased yield with reduced work effort. Sustainable intensification methods can thus work if the farmer has the opportunity to invest in mechanization and/or herbicide use to reduce manual labor. This should be combined with improved crops, fertilization and pest/disease control.

- The usage of herbicide is not entirely uncomplicated. It can be an effective way of reducing the workload, but costs money and can have a negative impact on the environment and farmers' health. If herbicide use should be included in the concept of sustainable intensification, farmers need support from advisers to reduce the negative side effects by properly managing and using the funds, says Sigrun Dahlin.

This research is a part of the AgriFoSe2030 programme and has resulted in a brief: Does labour invested in sustainable intensification practices give sufficient yield returns?