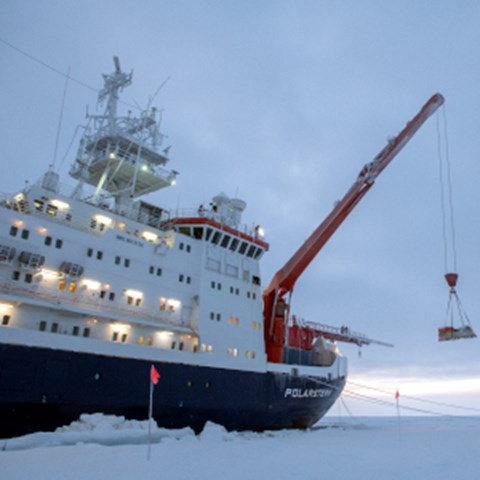 Researchers from the Department of Aquatic Sciences and Assessment participate in two Arctic expeditions that will extend our knowledge about the least known large marine ecosystem, the permanently ice-covered Central Arctic Ocean.

With climate change, the Central Arctic Ocean becomes more dynamic, with a marginal ice zone that moves further north in summer and south again in winter. Previous studies have only been carried out in summer but through the completed MOSAiC expedition and the upcoming SAS expedition (Synoptic Arctic Survey) with the icebreaker Oden, a whole seasonal cycle can be covered.

Participation from the Department of Aquatic Sciences and Assessment

The overall goal of the research at the Department of Aquatic Sciences and Assessment related to the two expeditions is to complement and extend our knowledge on the activity of the microbiomes of the permanently ice-covered Central Arctic Ocean. Of particular interest is the effect of climate change on biogeochemical cycles, which are mediated by microorganisms and change when microbial metabolic functions are modified by global warming.

Two researchers from the department, Anders Torstensson and John Paul Balmonte, were onboard the icebreaker Polarstern for part of the year-long MOSAiC expedition 2019-2020. Later this year, Prune Leroy will participate in the SAS expedition, starting in the end of July.

The research project associated to the expeditions is titled Uncovering the seasonality of sympagic and pelagic microbiomes and their metabolic functions in the Central Arctic Ocean with emphasis on carbon and nitrogen cycling. The aims are to reveal the microbial metabolism in summer melting water, explain the processes behind the high methane concentrations seen in the upper water column, verify and deepen our discovery of N2 fixation in these systems and uncover the metabolic properties of the still rather unknown microbiomes of the Central Arctic Ocean with genetic methods (metagenomics and metatranscriptomics).

Using experimental and observational approaches, two hypotheses will be tested:

The results will increase the understanding of how biogeochemical cycles will change in a warmer climate.

The project is a collaboration with Pauline Snoeijs Leijonmalm at Stockholm University (PI), Allison Fong at the Alfred Wegener Institute (Germany) and the many other groups participating in the MOSAiC and SAS expeditions.

MOSAiC - Multidisciplinary Drifting Observatory for the Study of Arctic Climate  - was the first year-round expedition into the central Arctic exploring the Arctic climate system. The backbone of MOSAiC was the year-round operation of RV Polarstern, drifting with the sea ice across the central Arctic from September 2019 to October 2020.