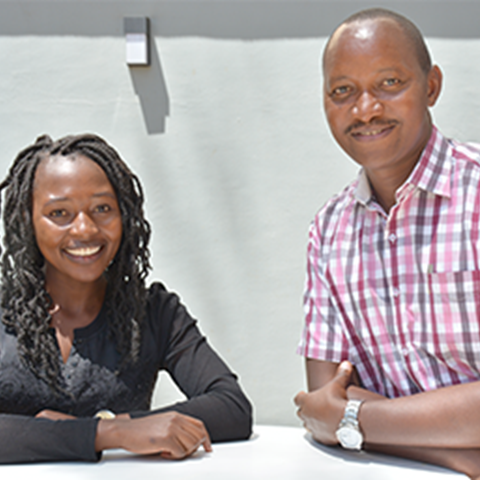 Researchers Deborah Muricho and Stephen Mureithi, two of the authors behind the article.

AgriFoSe2030 researchers have investigated how enclosures can be used as a land management tool to support food security in the drylands but reveal that the benefits of enclosures differ with perspectives.

Pastoralist communities are widespread in the arid- and semiarid regions of Africa. In fact, 70 % of East Africa’s livestock population resides here. Pastoralists rely on livestock for their livelihood. The harsh conditions of the drylands with severe droughts, erratic rainfall and land degradation make it difficult to sustain on conventional agriculture or other activities. As a consequence, food security in the drylands record the lowest indices compared to other areas in Eastern Africa.

A new article from AgriFoSe2030 researchers means that enclosures – areas fenced off from grazing – have the potential to improve food security in the drylands, but a multidisciplinary approach for research as well as applied management is highly needed.

A breathing space for land

Enclosures have been suggested as tools to improve soil quality and enhance food security due to their provision of a “breathing space” for lands to recover from grazing pressure. The fenced off enclosures are eased from grazing during a period of time to provide for tree growing and land restoration together with feed and fodder production, while at other times open to livestock grazing.

- We have seen that households that have enclosures are more resilient to droughts, are losing less of their livestock and even don’t need external support such as relief aid. So, this becomes an important area of policy that should be looked into with a multidisciplinary approach so it can be monitored and evaluated, says Deborah Muricho, one of the researchers behind the article.

The pastoralist communities are facing challenges posed by a combination of environmental and socioeconomic factors such as population increase, climate change and resource conflicts. Hear Deborah Muricho and Stephen Mureithi, researchers at the University of Nairobi, outline how the pastoralists are transitioning from transhuman movement to a more sedentary form, and how enclosures should be supported by policy to ensure a sustainable development.

Key messages of the video above:

AgriFoSe2030 - AgriFoSe2030 contributes to sustainable intensification of agriculture for increased food production on existing agricultural land; the aim is to do so by transforming practices toward more efficient use of human, financial and natural resources.