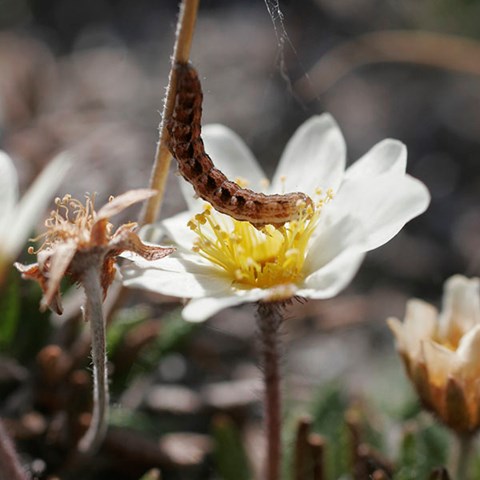 The larvae of the noctuid moth, Sympistis Zetterstedtii, some up especially during nighttime to feed on the pistils and stigmas of the mountain avens flowers. Photo: Kankaanpää, Tuomas

Climate and changes in it have direct impacts on species of plant and animals – but climate may also shape more complex biological systems like food webs. Now a Nordic research group involving SLU has investigated how micro-climate shapes each level of the ecosystem, from species’ abundances in predator communities to parasitism rates in key herbivores, and ultimately to damage suffered by plants. The results reveal how climate change may drastically reshape northern ecosystems.

Understanding the impact of climatic conditions on species interactions is imperative, as these interactions include such potent ecological forces as herbivory, pollination and parasitism.

Lead researcher Tuomas Kankaanpää, University of Helsinki, investigated how insect communities are assembled along micro-climatic gradients found on a mountainside in Northeast Greenland. He then compared this variation in environmental conditions to variation in the structure and function of different compartments of a food web. This web consists of a flowering plant as the primary producer (mountain avens), of moth larvae feeding on the flowers as consumers, and of parasitic wasps and flies, which, in turn, use moth larvae as living nurseries for their own offspring.

The study identified the micro-climate as an important factor in determining the local structure of parasitoid communities. Even within the uniform focal habitat type (heathland dominated by mountain avens), the abundances of species and the strengths interspecific interactions changed with climatic factors. As parasitoids are fairly specialized predators, they are particularly sensitive to environmental changes.

– To understand the more general impact of climate, we cannot always go species-by-species in each area. Rather, we need to uncover the uniting characteristics of species which show similar responses to climatic conditions, explains Kankaanpää.

For the parasitoid insects of the North, one key trait turned out to be the way in which parasitoid species use their hosts. Species that spend considerable time dormant inside of their host, waiting for it to grow, form one group: they tend to prefer sites on which snow melts early and summers which are hot and dry. Conversely, species that attack full-sized host larvae or pupae appear to do better at sites where thicker snow cover offers protection from cold winter temperatures.

The larvae of the dominant avens-feeding moth species also preferred warm and dry areas in the landscape. The same association was evident in a long time-series collected as a part of an ongoing monitoring program at the Zackenberg research station. During the past two decades, winters with thin snow cover and warm summers have resulted in an increased proportion of avens flowers being consumed.

A potentially serious consequence of climate change is a phenological mismatch – i.e. a situation in which the seasonality of interacting species change at a different rate. This can lead to situations where e.g. herbivorous insects escape some of their predators in time, thereby allowing herbivore populations to grow. The researchers found that the two dominant parasitoids preying on the focal moth larvae showed distinctly different temporal relationships with their host. One of the parasitoids matched the flowering of mountain avens and the development of its host larvae near perfectly across the wide range of spring arrival recorded within the study area. Yet, the other parasitoid species proved only loosely trimmed to coincide with specific life stages of its host. Such shifts can make a big difference once two parasitoids occupy the same host individual and competition within the still-living food source becomes physical. If one is then at the right stage and the other not, this can affect the outcome of the game.

– The parasitoids communities of the far North have previously received little attention. This is surprising, as these communities are species-poor, and thereby offer excellent opportunities to study what factors influence how species come together and interact, says Kankaanpää.

The research group behind the study bridges two countries and two universities, the University of Helsinki and the Swedish University of Agricultural Sciences (SLU). It is led by Professor Tomas Roslin, SLU. The group has studied insect interactions across the world and in Greenland and regards the Arctic as an ideal observatory for monitoring the effects of climate change. In the High Arctic, the climate is changing especially fast – and within this zone, North East Greenland offers a region where other human impacts are minimal, thereby allowing researchers to isolate the unique effects of climate.

How insect communities vary along landscape-level micro-climates provides clues as to how such communities may change with time. Kankaanpää stresses that there is much work to be done before we can fully understand how climate change will reverberate through networks of live interactions. Do, for example, the outbreaks of a single herbivore species pose direct risks to those other herbivores with which it happens to share parasitoids? Can the feeding of large hoards of the joint enemies eventually extirpate the rarer host?

Tuomas Kankaanpää
Researcher at the University of Helsinki
tuomas.kankaanpaa@helsinki.fi