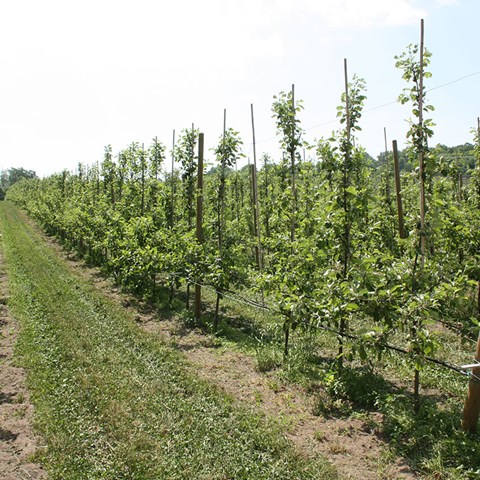 Through so-called green procurement, the public sector can participate in and influence the market for organic food. Since 2006, Sweden has had a goal that 25 percent of food consumption in the public sector should consist of organic products. The question then is what role does green procurement play and whether it contributes to the transition to more organic food production?

In a new PhD thesis from Umeå University (‘Food for Thought: Essays on Green Public Procurement and the Market for Organic Food’), economist Hanna Lindström has investigated how public procurement affects organic food production. The thesis thus addresses the gap between, on the one hand, the political interest in organic food production in Sweden and, on the other hand, the lack of research that examines the effects of green procurement on organic production. Hanna Lindström believes that so far, we have limited knowledge of both consumers' price sensitivity to organic food and the retail's pricing strategies, which creates a need for further research on the subject.

In four different studies, Hanna analyzes Swedish municipalities' organic food purchases and how public procurement functions as an environmental policy control instrument. The first study uses information about Swedish municipalities' organic food purchases, land use, and contributions to organic production. The analysis shows that the target of 25 percent organic in the public sector has had a positive impact on the area of ​​organic agricultural land. The second study analyzes the municipalities' purchases of organic food during the period 2003–2016, and what it is that affects how the municipalities relate to the goal. The results show that the target has a positive effect on the proportion of organic food purchased. In the third and fourth studies, Hanna looks specifically at consumer demand and price sensitivity with regard to organic and conventional milk, respectively. The analyzes are based, among other things, on scanner data from the retail trade and show that consumers who buy organic milk are relatively sensitive to possible price differences, even if the price differences are small.

All in all, the thesis shows that there is a positive connection between Swedish municipalities' purchases of organic food and the amount of organic agricultural land, and thus that green procurement can contribute to increased production of organic food.

Read the thesis here: Food for Thought: Essays on Green Public Procurement and the Market for Organic Food