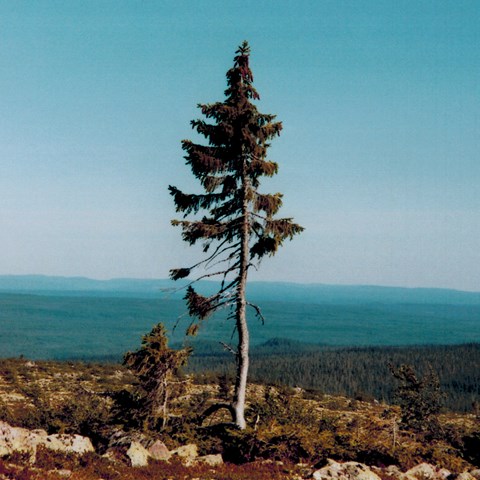 The spruce Old Tjikko, in Fulufjäll, Dalarna. The oldest spruce fossil is dated to 8000 B.C. Photo by: Karl Brodowsky, Wikipedia.

Despite the fact that spruce is so important in Sweden and today the most common tree species in our forests, it took a long time for it to establish itself. How the establishment took place has been the subject of several studies. Following a recently published study, the authors draw conclusions that opens the door to interesting research.

The new study shows that the spruces that existed in Sweden a long time ago are genetically related to the solitary spruce clones that can be found high up on mountain slopes even today. The basis for this conclusion is the analysis of ancient DNA extracted from sea sediments.

Stefan Bertilsson, Professor at the Department of Aquatic Sciences and Assessment, SLU, has participated in the study. He believes that the method to examine the ancient DNA (paleogenetic method) used in the study represents a powerful tool to shed light on historical biological processes.

The new article shows that spruce was established long before it became common in Sweden. The DNA analyses show that it existed in southern Sweden 14,000 years ago, that is immediately after the ice melted after the last ice age. Although spruce was established so early, it did not spread to any great extent. Usually, such early colonising plants spread with greater ease. But why spruce didn’t spread easily, and exactly how it came to happen, is still somewhat of a mystery.

This knowledge of historical climate change reactions helps us to understand the responses also of modern forests to climate change. With the knowledge, important tools such as forest management and restoration become more effective for a diversified and resilient forest in the future.