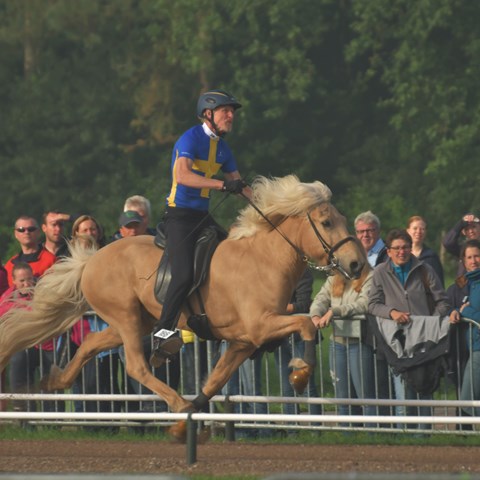 The aim of this study is to investigate the role of known variations in three different genes that have an effect on motor function, speed, muscularity and also memory and ability to learn. We intend to elucidate what makes a horse an elite racer in pace by investigating both physical and psychological factors that have a direct influence in their ability to pace at very high speed but also in their temperament and trainability.

One of our candidate genes has been proven to be involved in neural regulations in humans and laboratory species. Mutations of this gene have been associated with neurodevelopmental disorders in humans and its functions are also associated with the attention deficit/hyperactivity disorder (ADHD). It is also considered an important factor in memory and learning. Considering that pace-racing in Icelandic horses is a discipline that requires the animals to undergo very specific training, where their temperament and learning ability play a key role apart from their ability to pace at high speed, makes of this gene an interesting candidate for the study.

Another of our candidate genes has been associated with intelligence and motor retardation in cases where the gene presented mutations. It is interesting to study candidate genes that have an effect on motor function, which is undoubtedly important to the performance of alternate gaits. DMRT3, the gene that enables horses to perform alternate gaits through a single base pair mutation (Anderson et al, 2012) will also be involved in the analyses as a gene that affects motor function.

The third candidate gene is Myostatin, which has previously been associated with racing performance in Thoroughbreds. Two Myostatin polymorphisms (PR3737 and PR8604) have been found to be strongly associated with genetic potential and athletic phenotype, affecting both speed and muscularity. These single nucleotide polymorphisms have also been shown to have an effect on conformation, presenting different genotype distributions between horse breeds with different origin, morphology and uses. Such is the case with Icelandic horses, where significantly different genotype distributions for another polymorphism (PR5826) between horses used for different purposes.

The hypothesis of this study is therefore that these polymorphisms have an effect on the racing performance of Icelandic horses, particularly on their speed, muscularity, temperament and ability to learn. We are actively looking for Icelandic horses that compete in either P1, P2 or P3.

If you wish to know more about this project or would like to participate in the study by providing hair samples of your Icelandic horse, feel free to contact: