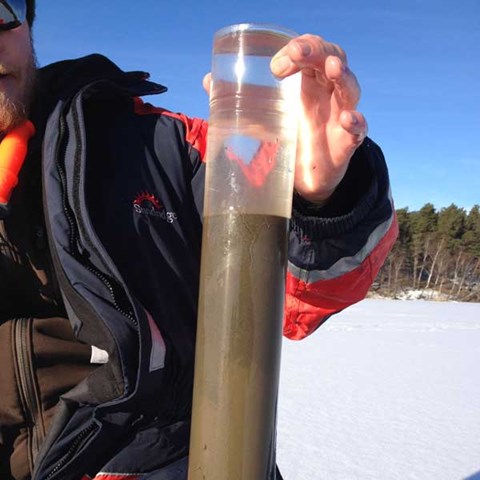 Brian Huser with a sediment core sampled from Lake Flaten in 2015. The water quality of the lake remains improved since the Aluminium addition treatment in 2000, with a 90 percent reduction of the internal phosphorus load from sediments. Photo: Johanna Schütz

More than 50 percent of lake ecosystems in Europe have not recovered from excess nutrient pollution even after the nutrient loading from outside the lake has been minimised. This is due to the internal loading of phosphorus (P) from lake sediments, the debt of phosphorus pollution deposited over decades and more. How to speed up the recovery? Compiling data from over 114 lakes Brian Huser and co-authors have estimated under which circumstances the treatment with Aluminium addition is an efficient restauration method.

It may take decades (or much longer) for the lake ecosystems to recover on its own after reducing external phosphorus pollution loads. And meanwhile the pollution loads from the unrecovered lakes affects downstream waters like the Baltic Sea.

Brian Huser is a researcher (docent) at the Department of Aquatic Sciences and Assessment, SLU. He is the lead author of a featured article in a special issue of Water Research focusing on geo-engineering of lakes to clean up phosphorus pollution (1).

Gathering 60 authors from 12 countries, the special issue (2) advances the knowledge on how to reduce the internal loading of phosphorus to lakes, and why different methods are effective or not.

When is Aluminium addition an efficient method?

One of the most often used lake restoration methods for phosphorus polluted lakes is treatment with aluminium (Al) addition. Up until now, however, there has been no good way of estimating the success and longevity of the results from Al addition.

"No one has known how long the effects are going to last and which factors to consider when calculating an effective dose. This has been the case for most restauration projects including other methods, like dredging", says Brian Huser.

Brian Huser and his co-authors have compiled monitoring data from 114 lakes that have been treated with Al addition, and from that built a statistical model showing the main factors and circumstances affecting the success and the longevity of the treatment. Treatment success was defined as a 50 percent reduction of the surface water concentration of phosphorus (P).

In short, the model shows that the phosphorus reducing effect of Al addition to a lake will be more effective and longer lasting if the lake is deeper, has a smaller watershed area versus lake area and if the dose of Al added is higher.

"In shallow lakes there are more processes that pull phosphorus out from the sediments, for instance, a relatively greater affect of the benthic community that can disturb sediment. This might reduce the longevity of the treatment if not accounted for in the dosing procedure", says Brian Huser, and adds "Also, if the watershed to lake area ratio is large, the effects of Al addition might be overshadowed by a greater inflow of water from the watershed, and the nutrient loads from the watershed will have more control on water quality in the lake. It's not that the Al doesn't work, it will always bind P once added, it's just that the incoming water from the watershed controls what we see happening in the lake." 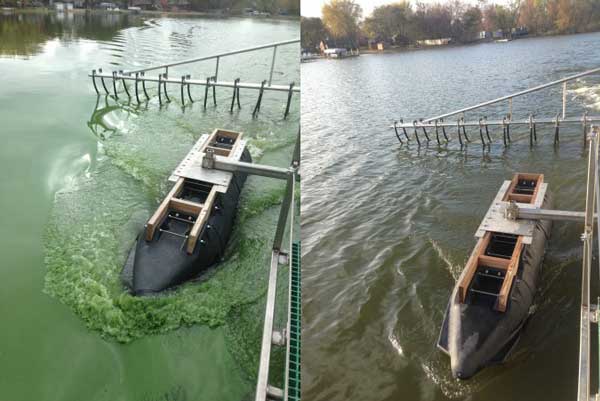 Before (left) and after (right) treatment with Aluminium addition at Spring Lake, Minnesota (US). The levels of phosphorus (P) in the water has been drastically reduced. Photo: HAB Aquatics.

Works in fresh and brackish waters

Aluminium addition to bind phosphorus is not a new method. It has been used as a lake restoration measure since the 1960's. The very first Al application in the world was in the lake Långsjön, Stockholm, Sweden. Basically you add a mineral to bind P in the sediment and it crystalizes over time.

"There are short term negative effects on, for instance fish and benthic invertebrates, when the treatment is made due mainly to the physical changes at the sediment surface. But after a few years the well-being of those communities are mostly higher than before the treatment due to improved water quality", says Brian Huser.

Lake Flaten is another case in Sweden where Al addition has been used. It cost around 3 million SEK to treat the lake back in 2000. Today the treatment is still helping to keep legacy P in the sediment, and water quality remains much improved, especially compared to a nearby, untreated lake.

But Al application, like other methods to reduce release of P from sediment, is not a 'one size fits all' restoration method for lakes with eutrophication problems. For example, in cases were the pH of the water is naturally high, other methods may be more appropriate.

The Al- treatment works in brackish water as well as in freshwater, and has been successfully applied also in Björnöfjärden and Säbyviken (3). Both bays now have drastically reduced levels of P in the water due to the permanent binding of P in the sediment by Al. Instead of this legacy P being released from the sediment during summer months, feeding algae and turning the water murky, it now stays in the sediment. Even oxygen conditions in the bottom waters have improved due to decreased production of organic matter (algae).

"Al addition will likely be applied to two or three of the lakes in the Växjö chain of lakes in the next few years, says Brian Huser.

Other attempts were made to reduce internal P loading from the sediment, for example dredging, but little to no effect was seen after these measures were applied. Sediment testing is currently under way to determine the best, and safest Al doses that can be applied to these lakes to reduce the cycling of decades of legacy P in the sediment.

In most cases it is cheaper to use Aluminium addition than other alternative measures to reduce internal phosphorus loading from lake sediments.

"Other methods like using clays or mussel shells, adding barley straw to prevent algal blooms or dredging the sediments, can be more expensive and generally do not work as well", says Brian Huser.

"In Sweden, we have come far with the measures taken to clean up phosphorus loading to lakes. But still, the targets for water quality will, in many cases, not be met without further measures in the lake to take care of legacy P in the sediment", says Brian Huser.

Brian and his co-authors now gather data for a paper more specifically on the cost effectiveness of the many different geo-engineering methods.

"It is a bit controversial, but we found cases of when it is 50 times cheaper to treat the phosphorus when it reaches the lake as compared to constructing wetlands or other measures in urban areas where the major external P loads, like wastewater, have already been controlled", says Brian Huser.

Recently Brian Huser and colleagues from SLU compiled the available knowledge about internal P-loading from sediment in Swedish lakes and coastal areas (4). According to the report Sweden still lack adequate monitoring with respect to internal P loading in lakes.

"Very few lakes are samples for sediment. Even fewer cases have used adequate techniques to determine the amount of legacy P in the sediment and how it affects internal P cycling", says Brian Huser.

These data are needed both to develop standards and to determine the cost effectiveness of measures to reduce internal P loading from sediment in lakes.

"Currently we have no way to determine what a natural internal P load from sediment in lakes would be. We also have trouble estimating how much it costs per kilogramme P removed for numerous measures designed to reduce internal loading", says Brian Huser.

Hopefully future projects will expand the knowledge base in this area.

(3) The project with Aluminium addition in Björnöfjärden and Säbyviken have been led by Emil Rydin, Uppsala University and funded by Baltic 2020. (in Swedish).

Aluminum (Al) is the most abundant metal in the earth’s crust. It is commonly used to clarify drinking water and reduce nutrients in wastewater.

Hundreds of lakes around the world have been treated with Al since the 1960’s. The average amount added to lakes has been approximately 30 grammes of Al per square meter, which is equivalent to spreading 30 small paper clips across the same area.

To determine an appropriate dose to inactive legacy phosphorus (P) in lake sediment, a technique called P fractionation is used. This method allows us to determine the amount of P that can be released to the water column and feed algal blooms.

Once added, Al forms a common mineral (gibbsite) that permanently binds P in the sediment. This P stays in the sediment and eventually becomes buried with new sediment over time. In most cases the treated layer is not visible to the human eye because the newly formed mineral mixes into, and becomes part of the sediment.

Recent data show that Al concentrations in treated lakes are actually lower than compared to before treatment. This is due to the fact that natural Al coming in to lakes from the watershed has less organic matter to attach to (algae). 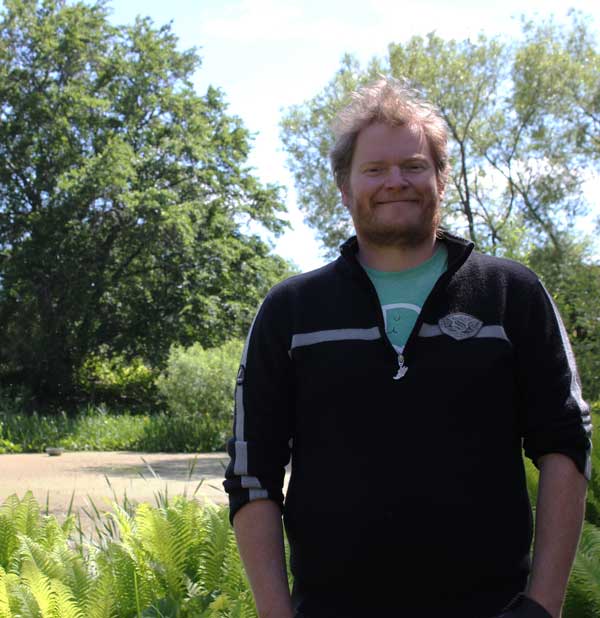 Brian Huser, Researcher at the Department of Aquatic Sciences and Assessment, brian.huser@slu.se, phone +46-(0)18-673128.

"When I started I didn't think lake sediments would be this cool and interesting. But sediment is the memory of a lake and holds the whole history since the lake was formed. They show you when people moved in around the lake, when the combustion of fossil fuels started, when acid rain declined, large scale disasters like Chernobyl, and much more"

Brian Huser got into the business of lake sediments during his masters work in Seattle Washington and at Lake Erken (Sweden), led by Emil Rydin from Uppsala University. Originally an engineer from Minnesota, he became hooked on the combination of sediment research and solving environmental challenges.