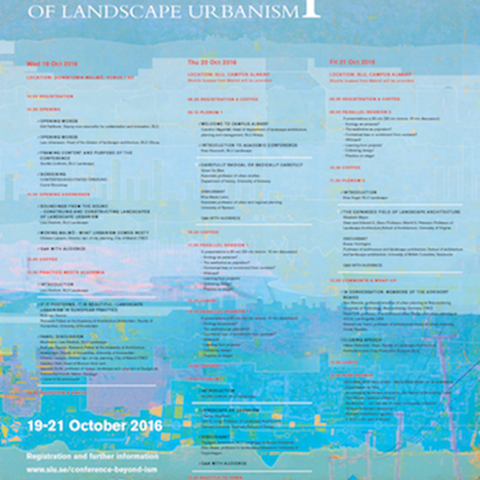 The cities of 21st century are patchworks of grey and green, of built-up areas and open spaces, and their predominant public plots are not parks, but woodlands. Hence the interest, in a landscape urbanistic perspective, to explore, experiment and shape their aesthetic and ecological qualities in an 18 hectare landscape laboratory on campus. Join a walk with founder and professor emeritus Roland Gustavsson, SLU, manager Allan Gustavsson, SLU, and landscape architect Jitka Svensson, morflandskapsarkitektur!

Alnarp Rehabilitation Garden was established in the outskirts of the campus in the early 2000’s with the aim of combining physio- and/or psychotherapy with the use of restorative natural areas through the creation of a garden that was designed to merge theories on horticultural therapy with restorative environments. Anna María Pálisdóttir, researcher in environmental psychology at SLU will guide us.

A stroll in the park of Alnarp!

The park of Alnarp was created in the mid-19th century and completed in the early 1880s as part of an agricultural school. The gentle topography of the park and its winding paths reflect the romantic ideals of a landscape park. The park’s about 2,500 species make it one of the most species-rich in the country and it is also a destination for ornithologists. Trees, shrubs and herbaceous plants from all over the globe are represented which also makes it a teaching asset.

Guided tour through Copenhagen’s historic and contemporary urban landscape by our colleague from SLU, as well as local Copenhagener, Mads Farsö. We will see sites in transformation, as well as traditional landmarks and new architecture.

Price: 400 SEK + VAT. Bus to Copenhagen, bike, and helmet included in the price. Train back to Malmö on owns expense and schedule (train runs every 20 min).

An emerging landscape of science! CANCELLED

Guided tour to the site for two of Europe’s largest research facilities under construction, MAX IV (with the most brilliant light beam ever produced) and The European Spallation Source (ESS) (with the world’s most powerful neutron source)  in Lund NE, as well as the surrounding emerging urban district Brunnshög including vast areas for recreation.

Price: 150 SEK + VAT. Guide (The city of Lund), bus to the site and bus returning to Malmö after the tour.

The Western harbour of Malmö!

In 2001 a housing exhibition Bo01 was held in this transformed former industrial site located at the waterfront of Malmö. Since then the area and its succeeding phases has been much recognized for its sustainability efforts and its urban open spaces. The tour will be guided by Thorbjörn Andersson, professor at SLU and landscape architect at Sweco Architects, and the designer of what has become the most popular public space in the area – The Dania Park.

Price: 150 SEK+VAT. Guide and bus to Malmö included in the price.
Duration: 2h guided tour by foot + time for transport to the site.

Biodivercity – a visit to test sites of urban biodiversity!

The research project Biodivercity has been establishing several test sites for improving the biodiversity while densifying the city of Malmö. This tour on foot, guided by the project manager of Biodivercity Annika Kruuse from the City of Malmö, takes us to several of the test sites located in the Western Harbour of Malmö.

Maximum number of participants: 20
Price: 150 SEK+VAT. Guide and bus to Malmö included in the price.
Duration: 3h guided tour by foot + time for transport to the site.