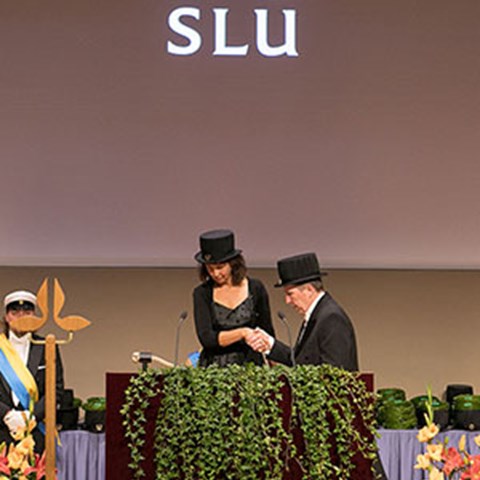 The doctoral award ceremony at SLU is our largest academic ceremony. It is celebrated each year, usually at the beginning of October.

The following awards are conferred at the ceremony:

Practical information to promovendi about the doctoral award ceremony

The dignity of doctor honoris causa is awarded by the faculties to those they particularly want to honour, and tie to their research fellowship.

SLU's Doctoral award ceremony was held on 5 October 2019 in Uppsala. 1 jubilee doctor, 7 hoonorary doctors and 38 new doctors by examination were awarded their degrees and received the symbols of their doctoral dignity.

The doctoral award ceremony is the most important and most traditional of the academic ceremonies. The Swedish word “promovera” originates from the Latin promovere, which means bring forward, to promote. The tradition has its roots in the European Middle Ages and its universities, and it emphasises the transition from one stage of the educational career to the next. The tradition has gone through many changes during time, but the content and the symbolism of the ceremony remain more or less the same as 100 years ago.

During the doctoral award ceremony, certain insignias are handed out, i.e. objects that symbolise the dignity of the doctors.