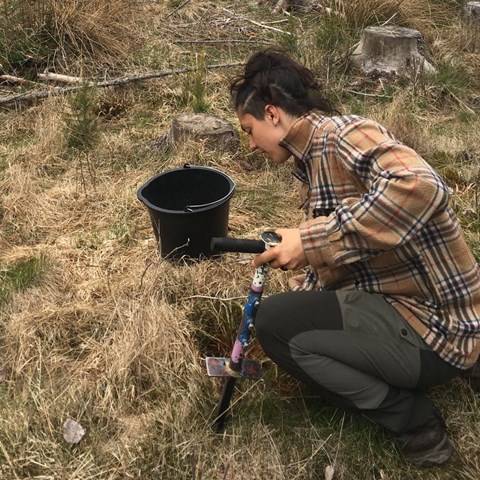 The project focuses on bioremediation of DDT-contaminated soil at forest nurseries using lignin degrading fungi (Myco-DDT). The fungi have the ability to degrade chlorinated organic environmental pollutants, such as DDT.

The insecticide dichlorodiphenyltrichloroethane (DDT) was used in the forestry sector in Sweden until the 1970’s to control forest pests. The former extensive use of DDT at forest plant nurseries, where DDT was applied by spraying the plants or by soaking the plants in DDT prior to planting, has resulted in approximately 750 plant nurseries sites in Sweden being classified as highly contaminated. Conventional remediation includes excavation and placing the contaminated soil in landfills. However, given the number of contaminated sites and the volume of soil that needs to be remediated, this approach is not considered a practical and economically sustainable solution. Bioremediation using lignin-degrading fungi has been proposed as a way forward but has not yet been evaluated in field scale.

Lignin degrading fungi produce enzymes that are specialized in breaking down lignin, and have also been shown to have the ability to degrade chlorinated organic environmental pollutants, such as DDT.

The aim of this research project is to develop a new, resource-efficient in situ bioremediation method for DDT-contaminated soils using lignin degrading fungi. The optimized method will be evaluated in the field to provide guidance to stakeholders on the appropriate use of fungi as a bioremediation method for DDT-contaminated soils at forest plant nurseries.

This 4-year research project is funded by the Geological Survey of Sweden (SGU) and Sveaskog.