During plant ontogeny, a pivotal issue for a plant is how to efficiently catch the Sun light energy, use and store it. The topic determines whether a plant can survive and propagate its offsprings successfully or not on Earth. Through photosynthesis, plants change the Sun light energy to a chemical form and store it in sugars including sucrose. Via sucrose, plants transport the energy and distribute it to different tissues for the purposes of surviving, development and reproduction. Sucrose serves not only as the energy form, but as a signaling molecule. Together with other signaling molecules, such as glucose, fructose, trehelose-6-phsphate and hormones, sucrose can more or less determine where to distribute the energy and how to store it, i.e. carbon allocation and biosynthesis of carbohydrate polymers. The process of sugar-regulated carbon metabolism in plant growth and development can be defined as plant sugar signaling. On our platform, we have used barley as a model system and isolated transcription factors (TFs), SUSIBA1 and SUSIBA2 (sugar signaling in barley). The TFs modulate gene expression in response to sugar levels (Figure 1) and are involved in plant carbon allocation, source-sink tissue communications and carbohydrate biopolymer synthesis. Our research aim is to find out the roles of the SUSIBA TFs in plant sugar signaling and development, particularly in carbon allocation and energy distribution into different carbon polymers, such as starch, fructan, beta-glucan, oil and cellulose. We use barley, rice, oat, tobacco and Arabidopsis for such studies. 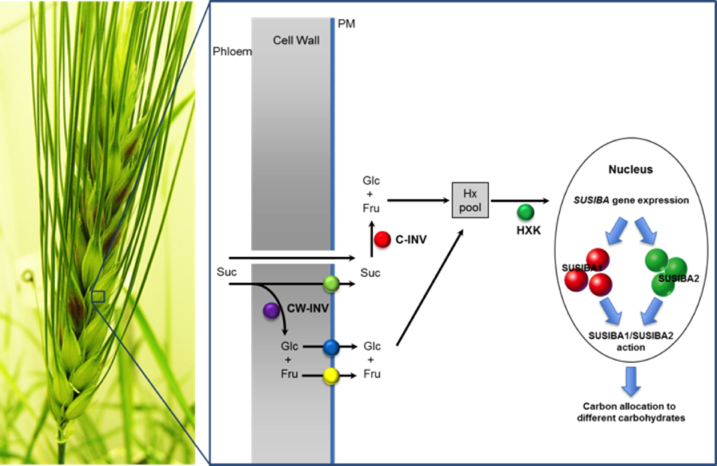