Regulation of glycoalkaloid biosynthesis in the potato

Plants must during their entire life defend against pathogens and attackers. To meet this challenge, plants display a vast number of defence metabolites with various effects on living organisms. However, a high level of defence metabolites is not always desirable in an agricultural perspective, as these substances often impair crop quality. One example on this problem is the presence of steroidal glycoalkaloids (SGA) in the potato. SGA are bitter-tasting defence substances with neurotoxic properties if ingested in humans and other animals.

Chemical structure of a potato glycoalkaloid

The SGA in cultivated potato species contain a steroidal skeleton to which 1 to 3 sugar molecules are bound. Over 95% of the total SGA content consists of α-chaconine and α -solanine, which are derived from the same aglucone, solanidine, but differ in their carbohydrate moiety. SGA occur in all parts of the plant, being highest in flowers and berries, whereas levels in tubers are lower. The basal SGA level in tubers is determined by genetic factors; some cultivars usually have low SGA levels, and others have high. However, basal levels can be elevated by external stresses such as light exposure or mechanic damage. The underlying regulatory mechanisms in these stress responses are largely unknown. 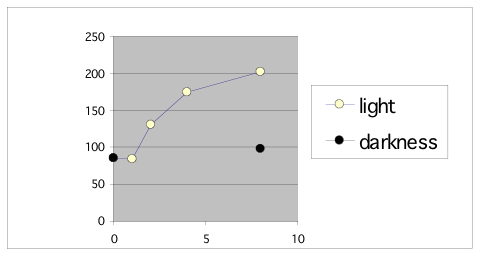 Consumption of potatoes with high SGA levels has caused several cases of severe poisoning. For safety reasons, an upper limit of 200mg total SGA/kg f.w. is widely recommended in tubers used for food. Unfortunately, these levels are sometimes surpassed, and cultivars such as ’Lenape’ and ’Magnum Bonum’ have been withdrawn from the market due to high SGA contents. This highlights the importance of routinely testing both basal and stress-induced SGA contents in new potato cultivars.

SGA are generally considered to be synthesised from sterols, which are essential membrane constituents in eukaryotes. We have in our work focussed on this aspect, particularly the role of cholesterol as a possible metabolic precursor. Present research combines genetics, biochemistry and molecular biology to increase understanding of the molecular regulation of SGA synthesis. Ongoing projects focus on three main areas: glycoalkaloid biosynthesis, key genes and genetic variation. Results may find application within potato breeding and the post-harvest treatment of tubers, and contribute to an increased quality and safety of potato. 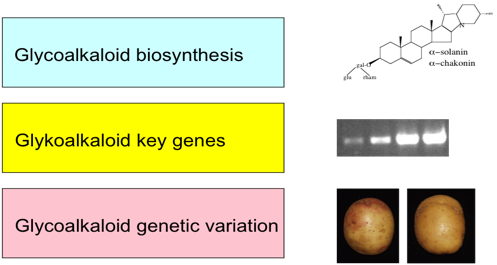 Present research areas of the group