Networking on how to translate sustainable development goals into action 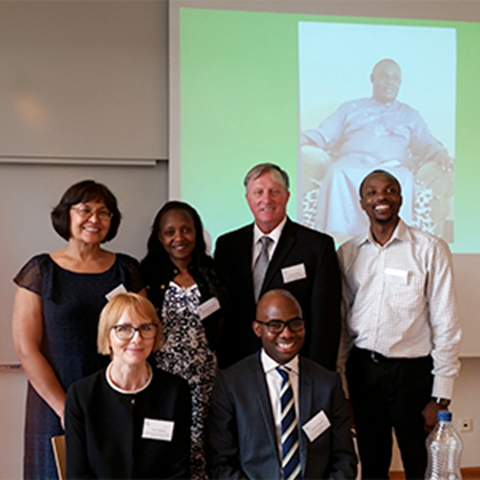 Drs. Salme Timmusk, Gulaim Seisenbaeva and Lawrence Behers together with students from development and outreach centres Julia Muthoni Macharia and Anthony Muraya at the networking event with the official representative form His Royal Highness of the Kingdom of Kooki, Uganda.

Five networking events were held on the last day of the Development Research Conference which took place at the Stockholm University main campus, Frescati. August 22–24th, 2016.

The conference was organised by Stockholm University, VR and SIDA. Dr. Salme Timmusk from the Department of Forest Mycology Plant Pathology was leading the networking event ‘Translating sustainable development goals into action requires a truly inter- and transdisciplinary approach and user centred design’. The official representative form His Royal Highness of the Kingdom of Kooki, Uganda participated in the event.

What is the best way to design helping programs?

It is clear that expected lasting impact of the Swedish activities in low income countries calls for fundamental rethinking about how to design the helping programs in low income countries. The purpose of the network was to propose a model where the capacity building collaborations link academic institutions and outreach projects.

This demands understanding of local enabling environments, taking advantage of local knowledge and competences. Any action taken in the targeted countries in order to adapt to the climate change should be seen as socio-political processes where decisions are embedded in the arrangements of the local Authority.

The King of Uganda wants to facilitate innovations for villages

The official representative form His Royal Highness of the Kingdom of Kooki, Uganda presented the letter from the King. The Kingdom of Kooki offers 30 acres of land to facilitate implementation of the innovations in the model village and businesses created on the land.

Vivid discussion took place following His speech. How does His Royal Highness see the implementation of 17 SDGs, Swedish research, innovations, patenting policy and local businesses in His country?

Ideas to speed up the climate change process in Uganda

The Kooki Kingdom representative stated an interest in speeding up the climate change adaptation processes in Uganda, and that the kingdom is not just waiting for the help from outside but is interested in active contribution. Being well aware of the global and local challenges, the kingdom sees part of the solution to the challenges by welcoming Swedish research innovations on Farmers Field School (FFS) based business models on the land offered.

FFS are tightly connected to educational outreach centres taking care of marginal vulnerable groups. He would see Swedish help in research and innovation based business development as a seed investment until it is self-sustaining.

The policy will reduce the number of economic refugees and the businesses built on the land would also provide opportunities for the low income country students to return and apply the knowledge acquired in Sweden.

Students do not return to their home countries

Quite often students cannot return due to low income and no conditions to apply their knowledge in their home country. It is more popular to find possibilities to stay in Sweden or elsewhere abroad. This however, while helping few individuals would nullify Swedish policy to help the low income country. Instead it would rob off the talented people from the country, the representative of His Royal Highness stated.

– This networking event was really successful with interesting discussions. I hope that this will lead to many future collaborations between Sweden and Uganda, says Salme Timmusk.

More information about the conference's events and displays