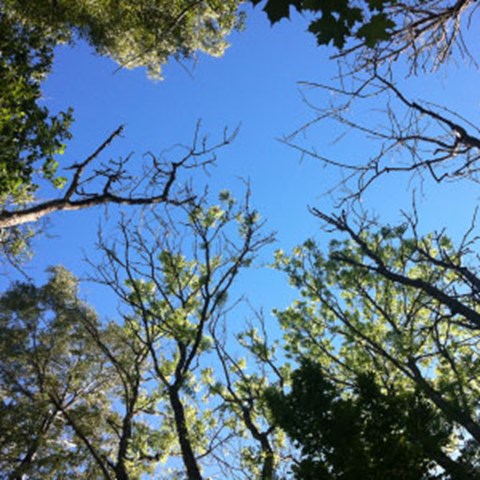 Ash was red-listed in Sweden as threatened in 2010 and had its status worsened to critically endangered in 2015. Photo: Michelle Cleary.

Pruning infected ash trees may temporarily save them from death caused by ash dieback, but so far there has been a lack of knowledge as to how much to remove of infected branches. A new study from the Department of Forest Mycology and Plant Pathology at SLU provides an answer: at least 30 centimeters.

Since the early 1990's, the common ash of Europe has seen a dramatic decline. The reason is the unwelcome guest Hymenoscyphus fraxineus, an invasive ascomycete fungus originating from eastern Russia and China. In its original habitat, it does no known harm to its host, Manchurian ash, but dwells within its leaves as an endophyte, only beginning to decay them once they are shed. The fungus was probably involuntarily introduced to Europe in the 1980's through some kind of transport of plant material. The European ash promptly proved to be extremely sensitive to the presence of the fungus and has since died rapidly. The fungal spores infect the tree host through the leaves, to spread along leaf veins into twigs and branches towards the stem. Lesions of dead tissue arise along the infected branches and provide an external indication on the spread of the infection.

In certain countries, such as Lithuania, the number of standing ash trees has been approximately halved since the beginning of the epidemic. In Sweden, the species was red-listed as threatened in 2010 and had its status worsened to critically endangered in 2015. Although ash is not a major species to the forest industry, it is a popular tree in parks and gardens and also host to many species that depend on it for their survival. Many other species are in turn associated with these species, which is why the disappearance of the ash would have far reaching ecological consequences.

Pruning diseased trees to physically remove infected plant parts is an old control method. But how far the fungus can be expected to have penetrated into an infected branch? Wood and bark samples were taken to investigate this. Photo: Michelle Cleary.

Hymenoscyphus fraxineus is a difficult pathogen to control. There are no chemical pesticides available, and even if there was, the widespread application of such products would be troublesome. Some biological control agents, based on mycoviruses, seem promising but are still far from ready for use. The action most likely to be successful is probably breeding for the naturally occurring resistance trait that a small number of ash trees exhibit, in order to raise a generation of trees tolerant to infection. This takes long time and is probably of limited comfort to those who discover early symptoms of infections on the beloved ash tree of their garden.

Pruning as an option

There are however actions available that at least temporarily limits the spread of the infection. One such is the subject of a new study from SLU, written by among others Diana Marciulyniene and Michelle Cleary.

"Pruning diseased trees to physically remove infected plant parts is an old control method", Diana says. "Regarding this pathogen, there has been a lack of knowledge regarding how far the fungus can be expected to have penetrated into a given infected branch. This was the subject of this study."

Diana and her colleagues studied infected branches from 36 ash trees in southern Sweden and scored wood and bark samples at 5 cm increments from the lesions. Through DNA-techniques, these samples were used to determine how far the fungus had spread.

At least 30 centimeters from the lesion

"We saw a large variation. Within 5 cm from the wound, we found the fungus in over 80 % of every investigated branch, but already at 10 cm this figure dropped to below 50 %. To be completely sure not to leave any fungus in the branch, the cut has to be made at least 30 centimeters from the lesion, at least according to our study."

So, is pruning a viable pathway to save an infected tree? Yes and no, according to Michelle Cleary.

"In theory, if all infected tissue is removed, the infection will stop. However, this method has its limitations, especially in practice. Identifying lesions in a large ash tree is time consuming and practically impossible for all but the most highly valued trees, such as in parks and gardens or trees with known coveted traits that can be used for breeding. To make pruning a worthwhile endeavor, the innermost lesion also has to be located at least 30 cm from the stem, lest the fungus might already have reached it."

"Also, pruning means creating a wound that might give other pathogens a gateway for infection", Michelle says. "Careful monitoring is necessary after pruning in order to avoid this. On top of all this, it is of course possible that some other part of the tree gets infected by Hymenoscyphus fraxineus at a later stage."

"In conclusion, our study shows that it is technically possible, although practically time consuming, to temporarily save infected trees if they are pruned at least 30 cm from each lesion and the cross sections are monitored afterwards."