Billions worth of spruce seeds threatened by a pathogen 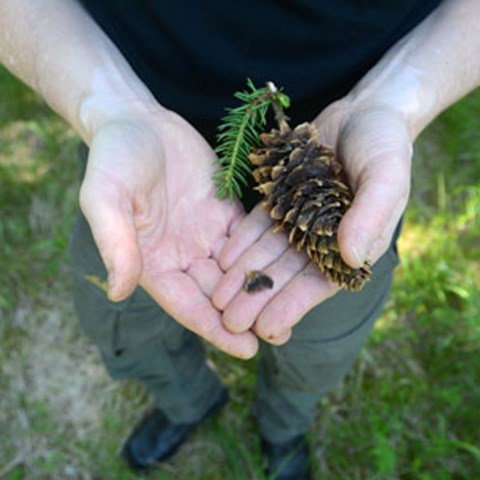 An important reason for the lack of spruce seeds is the pathogen Thekopsora aerolata, causal agent of the disease cherry spruce rust. Photo: Cajsa Lithell.

Spruce seeds from selected trees are crucial to secure replanting of harvested forest. Unfortunately, the production is lacking, partly due to damages caused by the pathogenic fungus Thekopsora aerolata. An ongoing research project from SLU tries to shed light on this still poorly understood pathogen.

Two-thirds of Sweden is covered by forest, of which more than half is spruce. This huge national resource is yearly converted into export revenues exceeding 80 billion SEK, and must be used with a focus on sustainability. An important part of that is obviously a recurrent rejuvenation of harvested spruce stands, which yearly demands almost 200 million spruce plants.

Almost 70% of these plants come from seed orchards. Orchards consist of trees especially selected and tested for their high-yielding traits, and treated to continually provide the highest possible amount of seeds. It has been estimated that the economic gains in using seeds from orchards will soon reach 1,7 billion SEK yearly. Healthy seed orchards are thus of great financial importance. 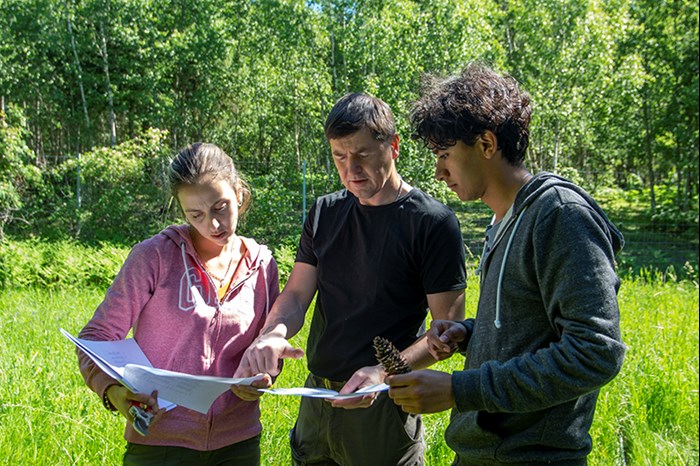 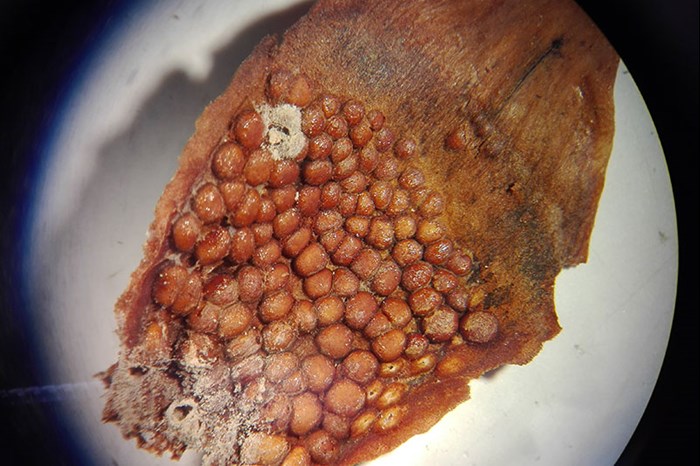 Aecidia form on the underside of the spruce cone's scales, which can continue to produce aecidia spores for several years. Photo: Hernán Dario Capador-Barreto. 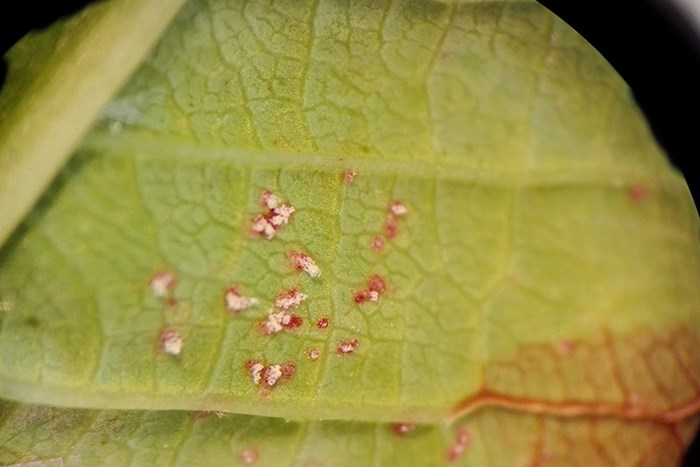 A large part of this potential revenue is never realized because the seed orchards cannot deliver 200 million seeds yearly, forcing the forest owners to use plants with lesser breeding value. An important reason for the lack of seeds is the pathogen Thekopsora aerolata, causal agent of the disease cherry spruce rust.

Cherry spruce rust may occasionally cause vast damages. In 2006, seed orchards across the entire southern Finland were attacked, losing 80 % of their seed yield. Spruce flush irregularly every few years, so there is no regular influx of seeds. 2006 was a year of massive flowering and seed production, and when the disease strike during such years, a large chunk of all seeds produced in a decade are lost.

Spruce cherry rust occur far to the North, where there are seemingly no bird cherry nearby. This allows for the consideration whether the bird cherry is always crucial. There are other examples of rust fungi that may take a “short cut” through the life cycle and skip the alternate host. Cronartium flaccidum is a pathogen on pine alternating between Pinus sylvestris and Melampyrum sylvaticum. A variant of the same species, Peridermium pini, may attack pines directly by aecidiospore infection, skipping the Melampyrum step. Without the alternate host however, the fungus cannot go through meiosis, meaning all individuals will be clones.

If T. aerolata were able to infect spruce cones in a similar fashion, that could explain Northern attacks far from bird cherry plants. That would also mean that it would be necessary to remove all infected cones in and around seed orchards, since they would keep producing spores and infect new cones for several years. But since the aecidiospores may spread far further than basidiospores, and since infected spruce cones are far more difficult to identify and bird cherry plants, it would be difficult and expensive to control spruce cherry attacks, were the fungus to possess this ability.

This has been investigated in a new study at the Department of Forest Mycology and Plant Pathology at the Swedish University of Agricultural Sciences. The study’s main author is Hernán Capador, and the project leader is docent Åke Olson.

– The aecidiospores are clones, Hernán says. If they really may infect cones, we should find many copies of the same individual on cones in a certain area. However, if we only find unique individuals, that may be interpreted as all infections being carried out by sexual basidiospores.

Hernán and his colleagues collected a large number of cones from several locations in Finland, Sweden and Norway, and analysed the Thekopsora individuals found on them using DNA technique. They discovered a large gene flow between locations, indicating that the Nordic populations may mate freely, without limiting population structures.

– We found almost exclusively unique individuals, Hernán says. One single genetic individual was found on more than one spot, and could in and of itself mean that clonal aecidiospores may infect cones, but if so we should have found many more examples. Thus, we conclude that T. aerolata is not capable of a shortened life cycle, but rather is dependent on the alternate host.

T. aerolata is a fungus that causes large economical losses in the longer run, mainly by forcing forest owners to use genetically poorer seeds. The incentive to decrease damages is large, but the possibilities is limited by a lack of knowledge. Hernáns and Åkes research give no cause to doubt that the most effective countermeasure currently still is to remove bird cherry in the vicinity of the orchard, but it is not known how far the basidiospores may disperse and thus not how large the bird cherry free zone must be. It has also not been established that there are no other alternate hosts that may serve the same purpose as the bird cherry.

– These are the questions we are considering now, says Åke Olson. Using spore traps, we can measure how far basidiospores are dispersed from a single bird cherry tree, which can teach us how far from seed orchards the bird cherry needs to be removed. We will also do infection trials using T. aerolata aecidiospores on Ericaceae species to find out whether they have any potential to act as an alternate host. The results of these investigations will help us understand how we best protect the orchards from spruce cherry rust in the future. We are also currently mapping T. aerolata's genome. When finished, this will be an important tool to better understand it's pathogenicity in the future.