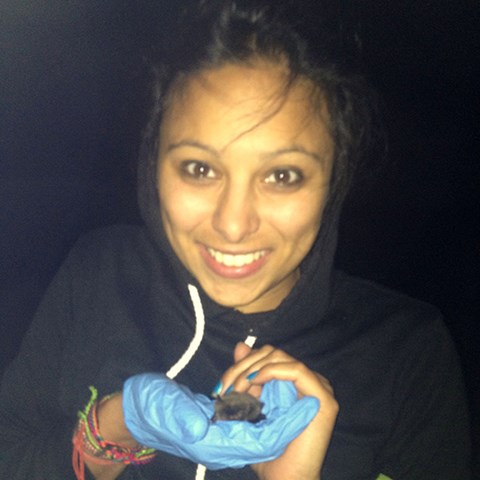 Manisha Bhardwaj and a bat.

Many animals avoid the area closest to the road due to noise, vibration, light and pollution. It is called the road effect zone. Manisha Bhardwaj, researcher at SLU, and her colleagues have calculated the road effect zone for bats. The study was conducted in Australia, but the phenomenon is relevant for road planning and efforts to preserve biological diversity also in other places.

Roads are barriers that make it difficult for many species to move through the landscape and many wild animals are injured and killed while trying to cross the road. In addition to these impacts, animals are also indirectly affected by the fact that the habitat closest to the road is disturbed. This has been seen for frogs, birds and mammals, and now also for bats.

“We used ultrasonic bat detectors and collected calls of bats at different locations away from the highway. We found that, for 7 out of 10 species, the closer we got to the road, the less active the species was. This suggests that the vegetation surrounding a road may not serve as good habitat for bats”, says Manisha Bhardwaj.

The total road effect zone varied between 123 and 890 meters for the different species in the study. The study was conducted in an agricultural area of Australia, where trees are limited to linear strips adjacent to roads and property boundaries, or scattered trees within fields. Then it is a problem if the bats don’t want to seek shelter and hunt for insects in the trees close to the road .

“This is relevant for all areas where there are only a few trees left and a large proportion of them are close to the road. In the article we suggest that all future environmental impact assessments include quantifying the road-effect zone for sensitive wildlife, in order to best plan and mitigate the impact of roads on the environment. This is essential to ensure enough high-quality habitat persists to maintain wildlife populations”, says Manisha Bhardwaj.