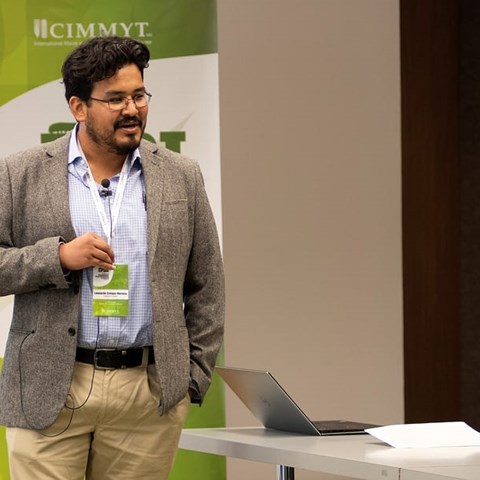 International science to save wheat — a crucial food grain for 2.5 billion of the world’s poor — from a rising tide of insect pests known as aphids was lauded on November 22 with the 2022 Japan International Award for Young Agricultural Researchers (the Japan Award).

The 2022 Japan Award recognized novel breeding approaches to identify and select for genetic resistance in wheat to two species of aphids that cause wheat grain losses reaching 20% and whose rapid spread is propelled by rising temperatures.

Leonardo Crespo-Herrera, a former student at Department of Plant Breeding at SLU, and his colleagues at The International Maize and Wheat Improvement Center (CIMMYT) managed to identify and characterize genome segments responsible for aphid resistance in wheat and its near relatives, as well as running innovative field tests for a set of elite wheat breeding lines that were predicted to carry that resistance.

"Aphid resistant wheat can contribute to more sustainable food production, protecting farmers’ harvests and profits, while reducing the need to use costly and harmful insecticides", said Leonardo Crespo-Herrera, one of the three 2022 Japan Award recipients.

Read the full article at the CIMMYT webpage

“Leo Crespo-Herrera got his PhD in plant breeding at SLU about eight years ago with the thesis Multiple Aphid Resistance from Alien Sources and its Chromosomal Location in Bread Wheat, under the supervision of Prof. Inger Åhman. Thereafter he moved in 2015 to the International Maize and Wheat Improvement Center (CIMMYT) to work as postdoc in wheat breeding at Obregón (northwest México), where late Nobel Peace Prize 1970 Laureate Norman E. Borlaug began the Green Revolution. Today he leads bread wheat breeding as CIMMYT senior scientist. His professional career shows how much he was able to accomplish in very short time due to his mastering of a knowledge-based approach for breeding one of the main staples of the world using genomics and enviromics.”