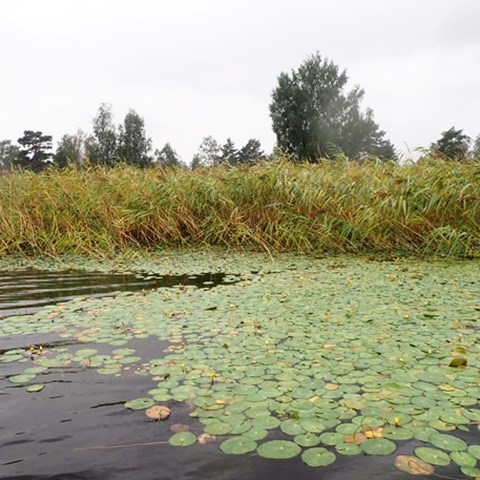 Sjögull is an aquatic plant found in Sweden's freshwater. It was implanted at the end of the 19th century and has spread ever since. How this has taken place is traced using DNA-based methods. This research also sheds light on where the risks of further spread are, and where control measures should be put in place.

Sjögull is a yellow and strikingly beautiful aquatic plant that resembles the water lily. Despite this, it is undesirable as it is invasive and easily takes over other native vegetation at its plant site. A number of problems are associated with this. Therefore, many municipalities and county administrative boards work actively to reduce and limit the spread of sjögull, often with mechanical methods. These methods are risky as they can easily lead to loose plant parts floating away and creating new stands (vegetative propagation). Sjögull can also reproduce by seeding (sexual reproduction) and then spread to places far away. This is the background to a new research initiative led by Stefan Bertilsson, professor at the Department of Aquatic Sciences and Assessment, SLU.

- My research on Sjögull began in 2019 when the Kronoberg County had seen signs of heavy seeding and needed help determining the genetic diversity, i.e. how the genetic material for the plant looks and has changed. Because I and my group have previous experience and equipment to analyze DNA, we felt we could help. At the same time, we could then build capacity and preparedness for a new type of DNA-based environmental monitoring.

Heavy seeding with long-distance spread becomes a problem when different genetic variants of the plant meet and reproduce sexually. The plant's variant of genotype (genetic set) is not visible to the naked eye. To see the difference, one must use DNA-based techniques in a laboratory and examine the plant's genome. This is where Stefan and his research group have significant experience and expert knowledge.

- We received plant material and then worked out methods to determine which different genetic variants are found in different lakes, watercourses, and regions, says Stefan. It turned out, for example, that sjögull from Bolmen in southern Småland and stocks in Lake Mälaren belonged to the same genetic variant. At the same time, we could see that the stocks of sjögull from other and closer lakes in Småland were genetically different. With this type of information, we were able to see what the spreading pattern of the plant had looked like and how measures to control the spreading of the plant can be made more effective.

It is therefore important to understand the routes of spreading and gain knowledge of the waters where several different genotypes exist simultaneously. In such waters the risk of sexual reproduction increases. A more large-scale survey was not included in the framework of the survey conducted in 2019, but Stefan received additional funding in the following years to take samples from many more municipalities and counties. Within this project, it also became possible to further develop the analysis method they used in the first study.

- Then we could clearly see how the genotypes varied between regions in southern Sweden, says Stefan. We started from the places where we knew that there were established stocks and where sjögull was a known problem. It was exciting to map this and draw conclusions about the consequences of seeding. It became something of a detective job.

At the moment, the extended investigation is not completely finished. However preliminary findings have been reported and discussed at meetings with stakeholders. Data from the study will also be made available so that other researchers can further this research. Stefan will probably also use the method for other purposes:

- To determine the genotype, we have used methods that are quite universal and can also be used for other invasive species after some adaptation. We usually look at microorganisms and their genome, but now we have broadened our perspective to include larger plants such as sea urchins, but also animals.

To see a map of the distribution of sjögull in Sweden, visit Artfakta. If you see sjögull in reality, you can report your find on the website Artfakta.