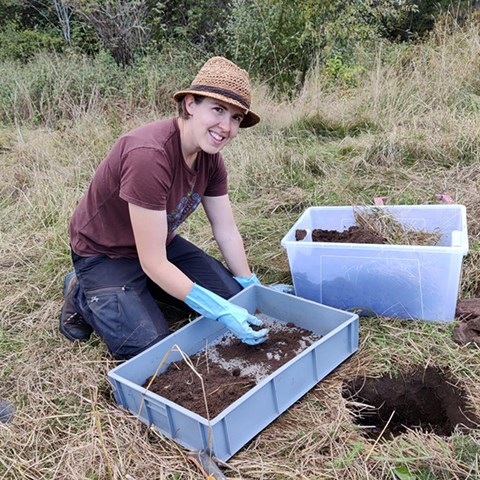 Earthworms are important for soil structure and nutrient cycle, but they suffer from conventional ploughing. However, refraining from ploughing is not always possible. Now SLU researchers have found that earthworms can be increased by including a legume in a crop rotation, regardless of which tillage practice is applied. This is a promising result for improving earthworm mediated ecosystem services in agricultural soils.

Earthworms are known to suffer from conventional ploughing. Their aisles are destroyed and the they can die or get hurt. Some of them end up on the surface where they will be eaten by seagulls or killed by the sun light. Although the importance of organic matter inputs for earthworms has also been accepted, reduced ploughing intensity has been considered as the most important way to increase earthworm numbers in agricultural soils.

However, in a recently published study, SLU researches found as much as one third higher earthworm densities in a cultivated soil when peas were included in a cereal crop rotation – regardless of tillage intensity. Although the benefit of the legume in the rotation was smaller for more tillage sensitive earthworm species, such as the lob worm (Lumbricus terrestris), the result is promising for example for organic farmers, who often need ploughing for weed control.

“There are other earthworm species than lob worm, which are not bothered so much by ploughing. Instead, these species care more about the amount and quality or food resources entering the soil, and legume residues seem to be among their most favoured delicacies”, says Kaisa Torppa, a PhD student at the ecology department.

“The long-term experimental site for this study is located right south from Uppsala – you can see the plots from train window when arriving to the city. It compares different tillage practices within two different crop rotations, and suited thus perfectly for our purposes”, rejoices Torppa.

Reduced numbers of earthworms in agricultural soils can lead for example to reduced soil nutrient availability, impaired water infiltration and reduced mixing of organic matter between soil layers, which may be further reflected in reduced soil fertility and even yield. Earthworm friendly agricultural practices may thus work as a means to increase soil mediated ecosystem services, to produce high yields with lower agricultural inputs.