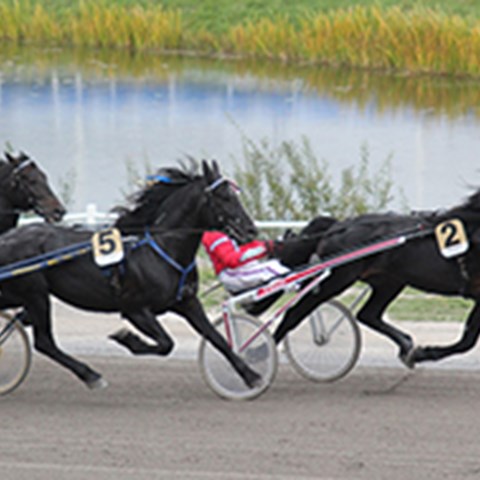 A remarkable improvement in racing performance of the Coldblooded trotter has occurred during the last sixty years. We assume that this improvement is partly explained by a marked increase of some favorable genetic variants originating from Standardbreds and introduced to the Coldblooded trotter by cross-breeding. This process should leave “genetic footprints” in the genome of Coldblooded trotters in the form of chromosome segments originating from Standardbreds. We currently compare the genetic makeup of North Swedish trotters (30 top-performing individuals), North Swedish draught horses (30 randomly selected individuals) and Standardbreds (30 top-performing individuals) by analysis of whole genome re-sequence data. To identify chromosome regions under selection, we will quantify the genetic variation between breeds using simple Fst statistics. For most chromosome segments we expect that the two former breeds should be most similar, reflecting their close relationship. However, for those chromosome segments harboring favorable genetic variants originating from Standardbreds we expect that the Coldblooded trotters should share a higher similarity with the Standardbreds. Chromosome regions under strong selection are likely to harbor genes affecting morphological and physiological traits important for performance in this model system. Genes that regulate energy metabolism and other biological processes that impact racing performance may also shed light on metabolic defects and diseases in other species.