Energy balance and fertility in Holstein and SRB cows 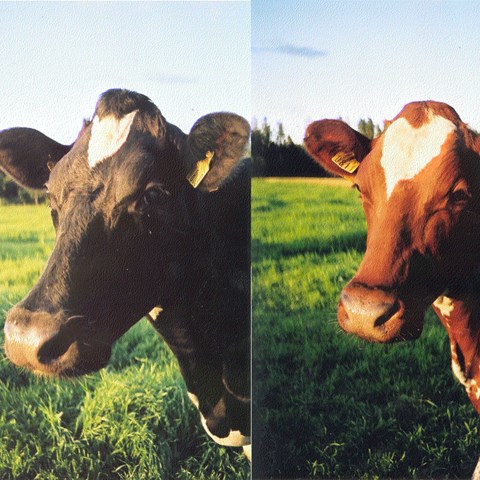 Most cows are in a negative energy balance the first weeks after calving as the amount of consumed feed is not enough to cover the energy demands for milk production and maintenance. It is natural to mobilize body reserves but a too rapid or severe mobilization makes the cow susceptible to metabolic disorders and impaired fertility.

In this PhD project the impact of breed and feeding intensity on reproductive performance in dairy cows was investigated. The studies were conducted in the framework of the EU project “Prolific” and took place in Sweden (SLU; experimental station “Lövsta”) and France (INRA). For the project around 85 cows were recruited (44 in Sweden and 39 in France) that were followed for two consecutive years. Animals were submitted either to a high energy diet (High energy; HE) or to a restricted diet (Lower energy; LE).

The results from the studies in Sweden showed that the metabolic patterns in response to diet, (HE, 35 kg and LE 25 kg ECM/day), were expressed differently between the SRB and Holstein cows. Diet had no effect on glucose and NEFA plasma concentrations but differences were found between breeds indicating a potential interaction between breed and diet in the control of lipolysis. Our results were indicating that the regulation of lipolysis is largely controlled by breed, whereas lipogenesis is primarily regulated by the diet. Mobilization of fat tissue was not affected by the different nutritional strategies during early postpartum.

Nutrition had no effect on BCS (body condition score), but this variable was influenced by breed suggesting that adipose tissue mobilization depended more on genetic background e.g. breed, and not so much on diet. The results from the studies both in Sweden and in France demonstrated that the risk of developing a severe negative energy balance after calving increased as the BCS losses before and after calving increased. High BCS at AI tended to be unfavourable correlated with early embryo mortality frequency, suggesting the practical use of measurement for BCS in reproductive management.

Cows of different breed mobilized fat reserves differently in order to cover their energy needs. A possible advantage of the energy metabolism in SRB compared to Holstein may provide them the possibility to relocate or save energy for reproductive processes. However, this advantage might also cause some SRB individual cows to become obese, resulting in decreased fertility. Limited negative energy balance in early lactation does not affect necessarily reproductive performance; however, may be a prerequisite for high milk production.

Today’s nutritional strategies aim increasing the dry matter intake but due to high individual variation within breed, it would be interesting to further investigate the effect of different management strategies (shorten dry period, prolonged lactation) based on a more individualized management.

The project is funded by: The EU-project PROLIFIC (Pluridisciplinary study for a RObust and sustainanLe Improvement of the Fertility In Cows)