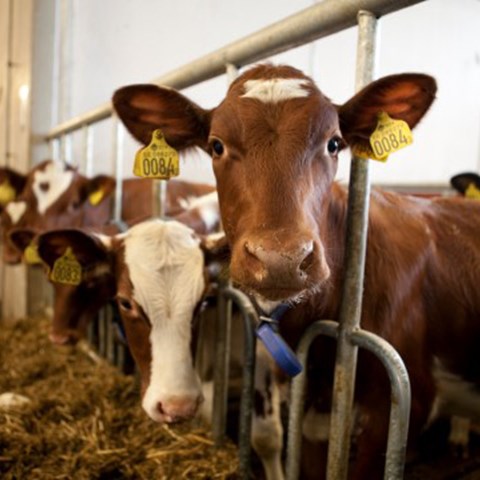 In the Nordic project Feed Utilization in Nordic Cattle (FUNC) our aim is to improve feed efficiency (FE) by breeding, feeding and management. A proper definition of FE will be developed together with correlated proxy traits measurable in large scale at reasonable costs. New tools to consider FE for a more efficient milk production with reduced environmental impact will be developed for use in a sustainable dairy production.

We found moderate heritability (0.2-0.4) for Dry matter intake (DMI) within the first 24 lactation weeks in primiparous Holstein, Nordic Red, and Jersey cows. The genetic variance for DMI might differ between breeds, but the difference was not significant in most of the periods studied due to large standard errors. Breed differences for genetic variances tended to be more obvious than for heritability. Genetic correlations for DMI were high in lactation weeks 5 to 24, whereas DMI in the first lactation period (lactation weeks 1 to 4) tended to be genetically different from DMI in subsequent lactation periods. The potential breed difference in genetic variation for DMI should be considered when using feed intake information from multiple breeds.

The project is funded by: The European Commission (EGS-ABG), The Swedish Farmers’ Foundation for Agricultural Research (SLF), and SLU.