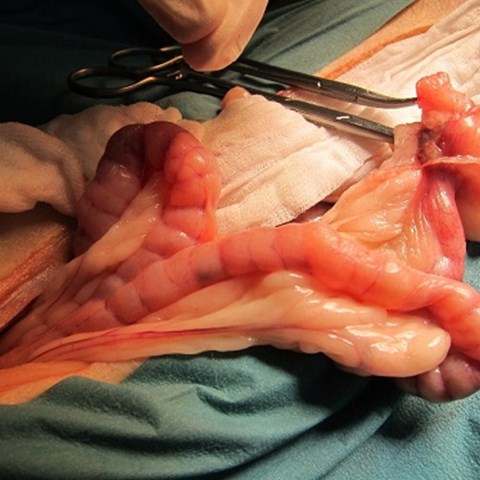 Pyometra, a life-threatening bacterial infection of the uterus, is classified as open or closed depending on the functional patency of the cervix i.e. presence or absence of vaginal discharge. In closed cervix pyometra, pus and bacterial products accumulate in the uterus, which is thought to induce a more severe illness.

The aim of this study was to investigate whether disease severity or outcome differed in dogs with open or closed cervix pyometra.

Prospectively collected data from 111 female dogs diagnosed with pyometra at the University Animal Hospital, Swedish University of Agricultural Sciences, Uppsala, intermittently during 2005–2012 was analyzed. Seventy-two dogs (65%) had open cervix, whereas 39 dogs (35%) had closed cervix. Differences between the two groups were explored by Wilcoxon Two Sample Test for continuous variables and Chi-square or Fisher's exact test for categorical variables. P < 0.05 was considered significant.

In dogs with closed cervix, sepsis was more common, the general physical condition more often moderately to severely depressed and leukocytosis, neutrophilia and monocytosis more frequently found. The results showed that closed cervix was associated with a more severe illness than open cervix at admission but not with poorer outcome as measured by postoperative hospitalization. These findings may be clinically valuable for optimizing monitoring and treatments in dogs with the disease.