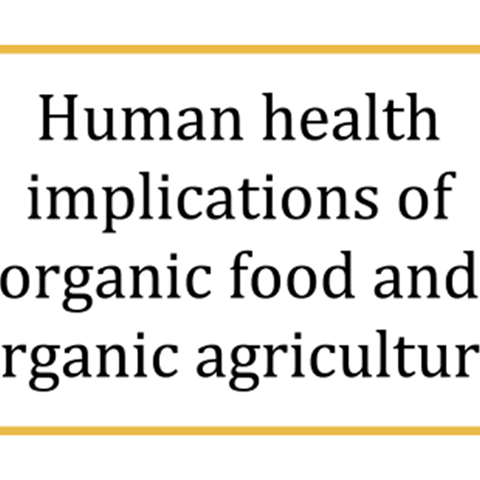 In a review of existing research, commissioned by a committee of the European Parliament, a group of European researchers has identified benefits of organic food production for human health. The researchers recommend the parliament to consider giving priority to certain organic production practices and their use also in conventional agriculture. The review resulted in the report “Human health implications of organic food and organic agriculture”.

The experts list several advantages of methods used in organic agriculture that benefit human health. The support of animal health and the restrictive use of antibiotics in organic animal production lead to a lower risk for the development of antibiotic resistance in bacteria, which is a major public health threat. Preventive measures of plant protection and restrictions of pesticide use in organic agriculture lead to a decreased pesticide exposure of consumers, with benefits for human health. The experts also conclude that slight differences in the content of nutrients and other beneficial compounds between conventional and organic foods likely have no major implications for human health.

Assistant Professor Axel Mie, Swedish University of Agricultural Sciences and Karolinska Institutet, Stockholm, coordinated the work, and his conclusion is clear: Several practices in organic agriculture, in particular the low use of pesticides and antibiotics, offer benefits for human health. Policymakers should support the use of such practices and their introduction in conventional agriculture, and make sure that organic agriculture continues to serve as a laboratory for the development of future healthy food systems.

In particular, the experts conclude, pesticide exposures in Europe are too high and need to be better controlled. Co-author, Professor Philippe Grandjean from the University of Southern Denmark, says: Exposures to some pesticides appear to be higher in Europe than in the USA, where three major studies have documented that children’s brain functions are reduced if the mother during pregnancy had elevated pesticide exposures. He adds: We shouldn’t risk our children’s brain functions for some short-sighted benefits in our food production. According to the report, Organic food production or so-called integrated pest management can serve this need.

Associate Professor Stefan Gunnarsson from the Swedish University of Agricultural Sciences concludes regarding antibiotic resistant bacteria: Organic farm animals are less likely to develop certain diseases related to intensive production compared to animals on conventional farms. As a consequence, less antibiotics for treating clinical diseases are required under organic management, where their prophylactic use also is strongly restricted. This decreases the risk for development of antibiotic resistance in bacteria. For example, even if there are considerable differences in antibiotic use between species and countries, it has been found that antibiotic resistance is less common in organic pigs compared to conventional pigs in France, Italy, Denmark and Sweden.

Further comments from the authors:

As regards health impact, Dr Emmanuelle Kesse-Guyot at Paris University 13 concludes: The body of direct evidence from epidemiological studies concerning the link between organic food consumption and health is insufficient, although some studies have resulted in interesting indications. Specifically, studies are often small and there is a drastic lack of well-conducted long-term studies in humans with an accurate assessment of organic food consumption.

Professor Ewa Rembiałkowska at the Warsaw University of Life Sciences states: There are indications that organic crops have a lower cadmium content than conventional crops due to differences in fertiliser use and soil organic matter, an issue that is highly relevant to human health. Organic milk has a higher content of beneficial omega-3 fatty acids compared to conventional milk, although we cannot currently derive any specific health benefit from this.

Assistant professor Axel Mie at the Swedish University of Agricultural Sciences and Karolinska Institutet adds: We have also reviewed knowledge regarding the content of nutrients and other beneficial compounds in fruits and vegetables. Although the production system has an effect on the crop composition, such differences are generally small and no specific human health benefit can currently be derived for crops from either production system.

Associate professor Johannes Kahl says: We find that people who prefer organic food also have overall healthier dietary preferences, including more vegetables, fruits, and wholegrain products and less meat. These patterns are also favourable from the perspective of environmental sustainability. However, it has so far not been evaluated if an organic agro-food system, comprising production and consumption, can serve as an example for healthy and environmentally sustainable food systems.