Unique study: Moose adapt their calving to the climate 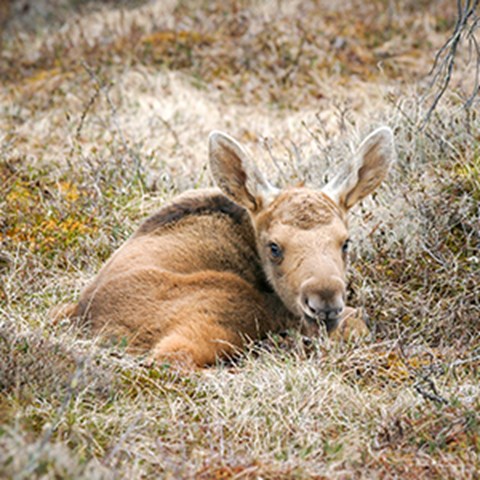 When moose give birth to their calves in spring, they have a great energy demand, so it is no accident that calving coincides with a lush landscape. In a world-unique study, researchers from the Swedish University of Agricultural Sciences link climate studies to knowledge about the life of this great herbivore and show that the moose's time for calving matches the beginning of the vegetation period, or occurs just before.

In northern environments, the short growing season constrains the access to high-quality forage for herbivores. To meet their energy demands during spring and summer, female herbivores need to time parturition with peaks in both resource availability and quality.

For herbivores with a large geographical distribution, flexibility in life cycle events like giving birth is central for adapting to changing forage conditions. The researchers thus expected a close connection in timing of parturition and vegetation onset within species' geographic range.

Moose (Alces alces) is a widespread species over the northern hemisphere across a large range of latitudes. As a consequence, females encounter large differences in plant phenology depending on where a given female moose occur within species' geographical range.

To test for flexibility in parturition timing in moose, the researchers analysed timing and variation in moose parturition dates of 555 females at 18 study sites across 12ᵒ of latitude (56-68ᵒ N, 1,350 km) in Sweden.

"Our results emphasize that moose match their parturition timing to vegetation onset along both latitudinal and continental gradients, but not in a given year," says researcher Wiebke Neumann at SLU. "We found a breakpoint in parturition timing at 64ᵒ N with females at this latitude and north of it giving birth 14 to 21 days later than females at 56ᵒ N. Despite adaptation across latitudes, we found temporal divergences with females south from 64 ᵒN calved after vegetation onset and females north from 64 ᵒN calved before."

"At higher latitudes, parturition before vegetation onset is a strategy to optimize forage utilization time with the very short growing season," underlines professor Göran Ericsson, responsible for the longterm study 1990-2017. "The highly seasonal northern environments it advantageous to adapt parturition towards long-term climatic patterns by matching the most favourable period. Given the direction of temporal divergence, our study suggests that climate change may have less of an impact on moose parturition at northern latitudes than southern latitudes."

Divergence in parturition timing and vegetation onset in a large herbivore – differences along a latitudinal gradient in Biology letters.