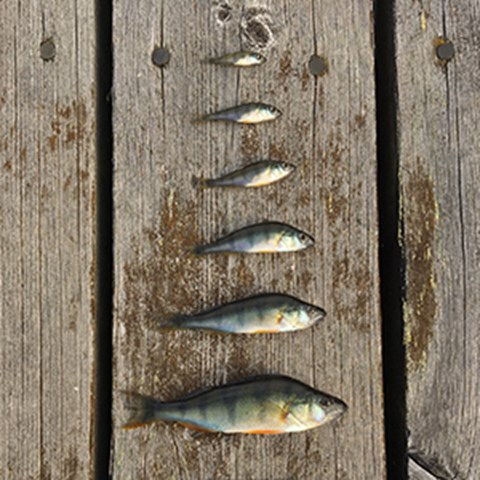 Many aquatic ecosystems in Northern Europe are getting both warmer and browner due to climate change, which affects the organisms living in lakes and coastal areas. A new doctoral dissertation from SLU shows that future warming and browning will likely lead to lakes with fewer, smaller, younger and slower growing fish, which likely will lead to less fish biomass production.

Recent and future warming and browning of aquatic systems may affect body growth of fish because of direct temperature effects on many biological rates, such as metabolism and feeding rates, and light limitation due to browning can affect visual feeding of fish as well as the production, abundance and composition of their prey.

In a new doctoral thesis from SLU, Renee van Dorst has investigated the effects of warmer and browner waters on fish individuals and populations. To do this, she used a range of methods, including observational fish data, a whole-ecosystem warming experiment, aquaria experiments, and mesocosm experiments. She studied the responses of two common European freshwater fish species: European perch (Perca fluviatilis) and common roach (Rutilus rutilus).

In her work Renee also studied if the effects of warming and browning differed with body size, sex, and between species. She found that responses to warming indeed depended on fish body size, as body growth of small, but not large, individuals was positively affected by warm temperatures. She also found sex-specific responses to warming, as body growth of males was more negatively affected by warming than female body growth.

“I hope that my thesis contributes to a broader understanding of how aquatic systems will respond to future climate change”, concludes Renee van Dorst.

The size of even-aged perch can vary considerably. These perches are however from another study. Photo: Renee van Dorst