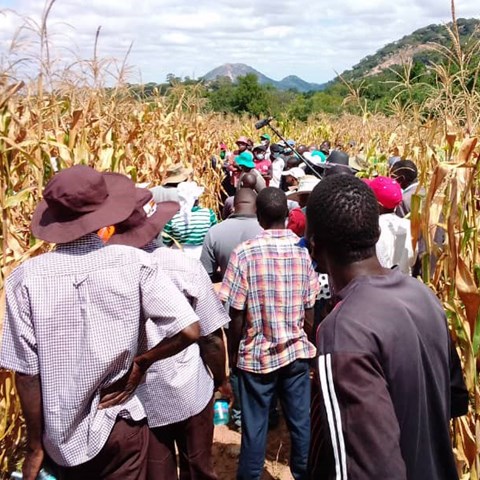 Researchers are testing new climate-smart agriculture (CSA) technologies in a semi-arid region of Zimbabwe. After a field day the local team was overwhelmed by the response of hundreds of smallholder farmers. Their request was simple: “Register our names for the installation of the Subsurface Water Retention Technology (SWRT) in our fields”. SWRT, one of the CSA technologies being investigated in the project, improves soil water and nutrient management and has shown phenomenal yields during the last two maize growing seasons.

The project is a collaboration between the Swedish University of Agricultural Sciences (SLU) together with Bindura University of Science Education (BUSE), the Alliance Bioversity-CIAT (the Alliance) and Michigan State University (MSU)

Since 2019, the researchers have been conducting on-farm experimentation of different climate-smart agriculture options in Zimbabwe. Recently a field day was held with stakeholders and farmers to increase awareness of the positive impacts of different soil water and nutrient management options.

The field day was attended by different stakeholders including, administration officers, agricultural extension officers, farmers and seed companies. The project team travelled with a media company to cover the event. Watch the video.

In the video, Professor George Nyamadzawo, the local project leader explained the genesis of the project from back in 2014 when BUSEwas investigating and promoting tied contours as a way to harvest water from the hills on the top of the fields.

In 2019, SLU, The Alliance and MSU built on the existing knowledge with an additional technology, SWRT that allows further harnessing of soil water whether from rainwater, irrigation or harvested water. While very low rains were received during the first maize growing season, in the second season (December 2020 to April 2021) average to above-average rains were received. However, under both conditions, the benefits of investing in SWRT were visible to the farmers who expressed their interest in the technology on the spot.

At the end of field day, with the leadership of the Chief of Marange district, a long list of more than 300 smallholder farmers registered to be considered for new installations of the technology on their farms if resources are available. The farmers also indicated that they are ready to co-invest in the installation of SWRT. While the testing of the technologies continues for another cropping season, the team is now exploring opportunities to make the technology accessible for resource-poor farmers that have also expressed a willingness to play their part.

Sandra Madamombe the project PhD candidate (SLU/Alliance), explained that besides the testing of SWRT and tied-contours, other CSA options such as maize-grain legume intercropping, manure and fertilizer applications and plant spacing are being investigated.

The synergistic options are expected to significantly improve water and nutrients use and enhance short and long-term agricultural productivity on coarse-textured soils in semi-arid regions.

“Our traditional farming methods are failing because of the climatic condition. Rainfall patterns are no longer as they were in the past. We have to adopt. We have to use new farming methods to feed the nation and our families,” says Ernest Tsarinzwa, one of the Membrane installers.