Why transport the newly hatched chick when it can travel safe inside the egg? 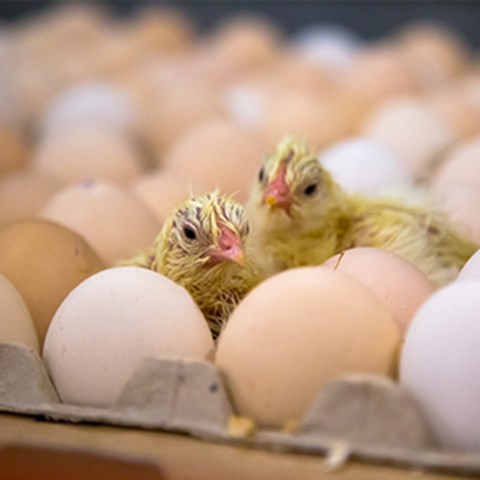 The aim of this project is to study effects of different hatching concepts and feed additives on the day old chicks’ quality, gut microflora and immune system.

Every year about 94 million broilers are hatched in Sweden and the consumption of chicken meat is increasing steadily. The traditional way of hatching chicks is however not optimal if taking the conditions of the chicks' biology into account. In the traditional hatchers commonly used today, there is no possibility to provide the newly hatched chicks with feed and water. This results in that the early hatched chicks have to await feed and water for quite some time.

The time between the first and last hatched chick in a batch of chickens is referred to as the hatching window and generally stretches over 24 to 48 hours. Even if all eggs are placed in the brooder at the exact same time, the natural variation causes the eggs to hatch at different times during the hatching window. If considering the time at the hatchery, loading and transportation to the farm it is often the case that early hatched chicks have to await feed and water for a few days.

The newly hatched chick is however equipped with a yolk sac designed to provide the chick with energy and important antibodies transferred from the mother hen (maternal antibodies). These proteins are there to protect the chick against disease until its own immune system is ready to handle such situations. Because of the yolk sac, it has been previously stated that chicks are well fitted to these first few days without feed and water. It has however been questioned if the nutritious yolk sac is enough to support a sufficient uptake of maternal antibodies in today's modern and fast growing broiler breeds. Together with supporting the early development of the chick's adaptive immune system, the energy in the yolk sac should also be able to support the energy demanding growth.

Previous studies have shown that early access to feed and water is important for the development of the chick's immune system. It has also been shown to be of high relevance for the disease resistance also later in life.

In The Netherlands several different hatching concepts have been developed in order to minimize the time to first feed intake. In these systems eggs are transported directly to the farm at embryonic day 17-18. These eggs are later on hatched during embryonic day 20-21 and the chicks have immediate access to feed and water. Furthermore, the chicks are not subject to the high noises in the hatcher, disinfectants, handling and transportation as newly hatched. Another Dutch initiative already implemented in small scale in Sweden is a hatcher particularly developed for providing the hatching chicks with feed and water. All of these concepts are of interest to study in combination with different particularly beneficial pre start and start feeds in order to give the chicks the best possible start in life.

The gut of the newly hatched chick is sterile. This fact makes it possible to colonize the gut with favourable bacteria boosting the immune system. This could be done by supplying a feed additive with pro or prebiotic characteristics the first days in life. This window of opportunity is quite short, thus the extra costs for such an additive is limited.

During the fall of 2016 the first hatching study was conducted where the effect of hatching time on time to first feed intake was studied. In this study a number of 800 Ross-308 chicks were hatched at the Lövsta Research Facility.

In the fall of 2017 another study will be carried out in close collaboration with SweHatch. The effect of early access to feed and water already in the hatcher will be studied. The chicks' immunological status, gut development and gut microflora will be studied. When the results from the two first studies are compiled the course of the remaining parts of the project will be determined to further investigate how the quality of the day old chick could be optimized.

This PhD project is funded by SLF, Kronfågel Sverige and SLU. The project runs to 2020.