Part of the diminishing biodiversity in Sweden is associated with loss of grazed landscapes. There are studies indicating that grazing by horses might increase biodiversity. The Swedish horse breed Gotland russ is considered to be hardy, easy to keep and could thus be suitable for grazing in Nordic conditions. The population of Gotland Russ is small and the breed is endangered. Increased grazing by Gotlands russ could therefore contribute to increased biodiversity and preservation of the breed.

The aim of this study is to evaluate the effect of year around grazing by Gotland russ on biodiversity and animal welfare. Four horses each in three separate 10 ha enclosures will be studied for three consecutive years. The effect on biodiversity will be assessed by repeated plant and invertebrate inventories. Ponies will be GPS monitored, and checked daily for welfare criteria. Upon indications of lowered condition, horses will be excluded from the study based on pre-determined criteria. Our results will be important for future animal keeping, in benefit of biodiversity, animal welfare and Gotland russ preservation.

This project is partly financed by WWF. 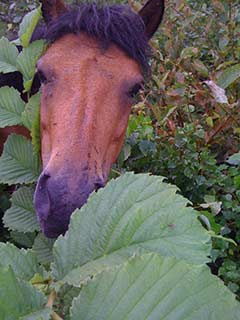