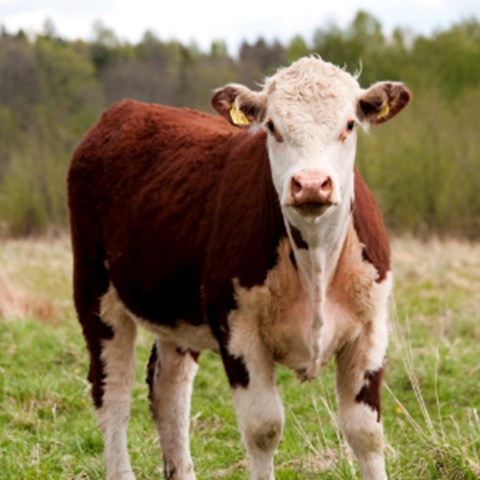 Hereford is one of the breeds studied in the project. Photo: Viktor Wrange

Genomic selection has increased the genetic gain in dairy cattle and the method has been, or is about to be, introduced in beef cattle breeding in several countries. It is of interest to use this method for genetic evaluation of beef cattle also in the Nordic countries. A Swedish study about genomic selection in beef breeding will focus on the Hereford and Charolais breeds.

The long term goal of the three-year-long research project is to enable the use of genomic enhanced breeding values for selection of breeding animals in the most common beef breeds in Sweden. The current BLUP-evaluation, where BLUP means 'Best Linear Unbiased Prediction', uses information about trait recordings from the Swedish beef recording scheme, KAP, together with pedigree information. By adding information on DNA-level, it is possible to increase the accuracy of breeding values further, and thus increase the genetic gain.

Genomic selection is based on information from thousands of genetic 'SNP-markers' spread over all chromosomes in the genome. The genotype of an animal can be known by reading the genetic code in such markers in a DNA-sample. For this information to be useful, we also need to know which genotypes are associated with the desired traits, such as easy calving or high daily gain. This requires analyses of data from many animals with known genotypes and trait recordings in a reference population.

An important part of our research project is therefor to select and genotype animals to create a reference population. We plan to genotype about 4000 animals with traits recorded in KAP. Once we have tested different statistical analyses and investigated which genotypes are favourable, genomic breeding values can be estimated. It will then be possible to estimate breeding values for animals in the same population only based on their DNA-samples, but for beef cattle it has been shown that a method that combines all types of information works best.

The method is called 'single-step' and uses available information on trait recordings, pedigree, and genotypes at the same time. In that way all animals can get genomic enhanced breeding values, even if not all have been DNA-tested. To record traits in KAP thus remains important for breeding purposes. The introduction of genomic selection will be facilitated by the planned use of SNP-markers also for future pedigree verification, which will rapidly increase the number of genotyped animals. It will take a few years before genomic selection is in practical use in the genetic evaluation of Swedish beef cattle, however.

The project is financed by: Stiftelsen Lantbruksforskning (the Swedish Farmers' Foundation) and contributions from Svensk Köttrasprövning AB and VikingGenetics.