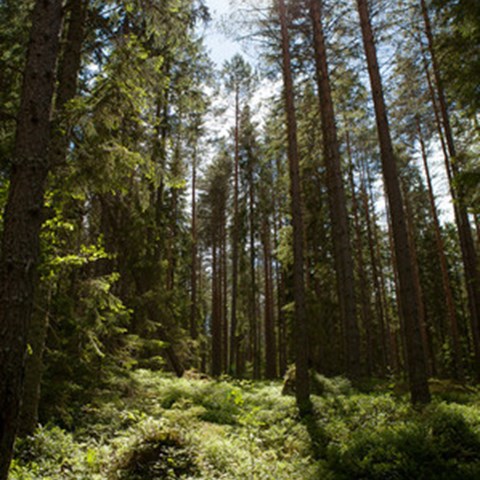 Numbers are down for the forest’s blueberry bushes and up for herbs such as sorrel and several fern species. Using long data series from the permanent areas of the Swedish National Forest Inventory, vegetation ecologist Per-Ola Hedwall has been able to show a large-scale change in the forest’s ground cover.

“We’ve shown that the increasingly dense forest has affected the ground cover and that this has occurred on a large scale. It would have been impossible to show this without national data series that span long periods of time,” says P-O Hedwall at SLU’s Department of Southern Swedish Forest Research.

SLU has a unique mission among Swedish universities: the collection of many different forms of environmental analysis data, such as the ground cover data that P-O Hedwall and his colleagues have used. Since 1983, this data has been collected on behalf of the Swedish Environmental Protection Agency on a selection of the Swedish National Forest inventory’s permanent test areas. The primary purpose of the data collection is to study the composition and variation of vegetation over time. But the quantities of collected information are also a treasure trove for researchers like P-O Hedwall, who want to explore patterns in the development of the Swedish forest landscape and how different external factors have contributed to long-term changes.

“The change in ground cover is mainly due to three things: nitrogen deposition, changes in forest management, and climate change,” says P-O Hedwall. Natural forests and mixed forests have been replaced by densely planted forests that are essentially monocultures.

Dense forests and nitrogen availability favour plants that prefer shade and good access to nutrition. Other plants, such as blueberries, are disadvantaged. As P-O Hedwall puts it, this finding is “no blockbuster”. Yet it is still important given the ecosystem function and importance of berry bushes, e.g. for large mammals. Today, the new knowledge has begun to spread.

“Initially dissemination was a bit sluggish, but now I think our results have had a good impact – for example, the forestry industry has used them as one of several arguments for increasing the proportion of pine trees in southern Sweden.”

When P-O Hedwall started his PhD studies 10 years ago, few scientifically reviewed studies based on ground cover data from SLU’s environmental analysis had been published. It was not until that time that sufficiently long series had been compiled, and no one had previously used them in organic modelling. Since then, he has conducted a continuous study based on these data.

In one of his latest articles, P-O and his research group also used older material from the Swedish National Forest Inventory (dating from the 1950s and 1960s), which made it possible to analyse a longer period of time. Through their clever processing of modern data, they were able to compare this information to the older data series. The modern, more complex material was classified so that it was comparable to older data containing simpler and more general information. This study also indicated a major change in southern Sweden in particular, where the incidence of shrubs had decreased by nearly fifty percent over a 50-year period.

P-O Hedwall encourages more researchers to delve into the material from the Swedish National Forest Inventory’s Vegetation Inventory. Sometimes researchers call him up and ask questions: How are the test surfaces are laid out? How should results be interpreted?

“I think it’s great that our research is getting noticed, and I’m happy to help,” says P-O Hedwall. “And I’m still learning new things about how the samples are collected.”

How are data collected?

One of the challenges identified by P-O Hedwall is understanding how the data collection is done and how this determines which analyses can be conducted. In this respect, environmental analysts at SLU are very helpful. They can also help solve analytical problems. P-O has three pieces of advice for those interested in launching research based on the vegetation data of the Swedish National Forest Inventory.

One: Get help from the environmental analysts. They’re trained researchers themselves, and can be very helpful. They also work daily with these data. Two: Learn from other people’s mistakes. Three: Delve into what the set-up looks like from the beginning, because doing so is time well-spent. And finally, a tip:

“The Soil Inventory – there’s a lot to dig into there. I think that material is underused,” says P-O Hedwall.