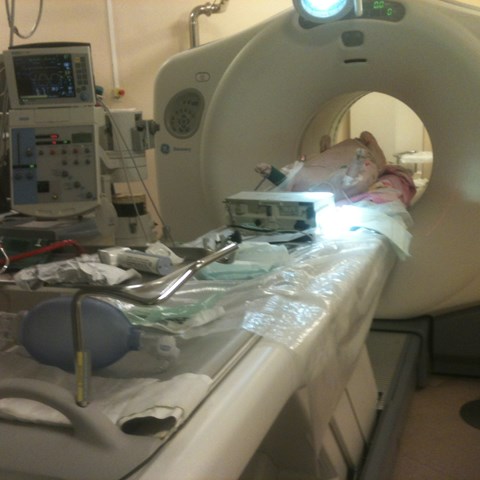 Radiolabeled Exendin-4, a synthetic glucagon-like peptide-1 (GLP-1) analog, is used as a tracer for diagnostic purposes of β-cells and in experimental animal research.

Exendin-4 can be radiolabeled with 68Ga, 111In or 99mTc and used for positron emission tomography (PET) and single-photon emission computed tomography (SPECT) imaging to diagnose insulinomas, visualization of pancreatic β-cell mass and transplanted Islets of Langerhans. In humans, Exendin-4 is widely used as a therapeutic agent for treatment of type 2 diabetes (T2D). The compound, which is administered subcutaneously (SC) may cause nausea, vomiting and a minor increase in the heart rate (HR). However, possible side-effects on cardiovascular functions after intravenous (IV) administration have not been reported. This study describes the Exendin-4 dose at which cardiovascular side-effects occur in pigs and cynomolgus monkeys. The IV effect of the tracer on insulin secretion is also investigated in pigs.

Seven clinically healthy littermate pigs (40 days old) were used; three of them were made diabetic by streptozotocin (STZ). All pigs underwent PET imaging under general anesthesia to examine the glucagon-like peptide-1 receptor (GLP-1R) in β-cells with radiolabeled Exendin-4. A baseline tracer dose IV [68Ga]Exendin-4 (0.025 ± 0.010 μg/kg) followed by a competition dose IV [68Ga]Exendin-4 (3.98 ± 1.33 μg/kg) 60 min later were administered. Blood samples were taken and analyzed for insulin secretion by using ELISA. Cardiovascular and respiratory variables were monitored throughout the experiment.

Link to the article

Anneli Ryden
Lecturer at the Department of Clinical Sciences; Division of Veterinary Nursing