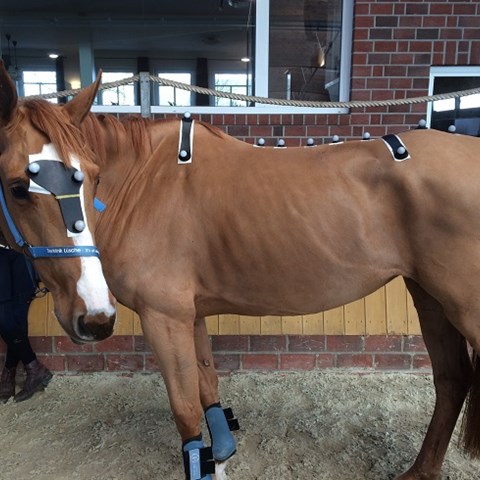 Clinical assessment of spinal motion in horses is part of many routine clinical exams but remains highly subjective. A prerequisite for the quantification of spinal motion is the assessment of the expected normal range of motion and variability of back kinematics. The aim of this study was to objectively quantify spinal kinematics and variation between measurements, days, and different surfaces and in sound horses.

In an observational study, twelve owner-sound horses were trotted 12 times on four different paths (hard/soft straight line, soft lunge left and right). Measurements were divided over three days, with five repetitions on day one and two, and two repetitions on day three (recheck) which occurred 28–55 days later. Optical motion capture was used to collect kinematic data. Elements of the outcome were: 1) Ranges of Motion (ROM) with confidence intervals per path and surface, 2) a variability model to calculate between-measurement variation and test the effect of time, surface and path, 3) intraclass correlation coefficients (ICC) to determine repeatability.

ROM was lowest on the hard straight line. Cervical lateral bending was doubled on the left compared to the right lunge. Mean variation for the flexion-extension and lateral bending of the whole back were 0.8 and 1 degrees. Pelvic motion showed a variation of 1.0 (pitch), 0.7 (yaw) and 1.3 (roll) degrees. For these five parameters, a tendency for more variation on the hard surface and reduced variation with increased repetitions was observed. More variation was seen on the recheck (p<0.001). ICC values for pelvic rotations were between 0.76 and 0.93, for the whole back flexion-extension and lateral bending between 0.51 and 0.91. Between-horse variation was substantially higher than within-horse variation.

In conclusion, ROM and variation in spinal biomechanics are horse-specific and small, necessitating individual analysis and making subjective and objective clinical assessment of spinal kinematics challenging.

Hardeman AM, Byström A, Roepstorff L, Swagemakers JH, van Weeren PR, et al. (2020) Range of motion and between-measurement variation of spinal kinematics in sound horses at trot on the straight line and on the lunge. PLOS ONE 15(2): e0222822.

Researcher at the Department of Anatomy, Physiology and Biochemistry (AFB); Division of Anatomy and Physiology