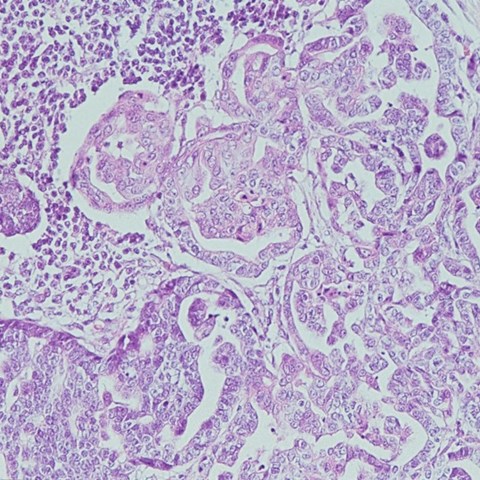 MicroRNAs may act as oncogenes or tumour suppressor genes, which make these small molecules potential diagnostic/prognostic factors and targets for anticancer therapies. Several common oncogenic microRNAs have been found for canine mammary cancer and human breast cancer. On account of this, large-scale profiling of microRNA expression in canine mammary cancer seems to be important for both dogs and humans.

Expression profiles of 317 microRNAs in 146 canine mammary tumours of different histological type, malignancy grade and clinical history (presence/absence of metastases) and in 25 control samples were evaluated. The profiling was performed using microarrays. Significance Analysis of Microarrays test was applied in the analysis of microarray data (both unsupervised and supervised data analyses were performed). Validation of the obtained results was performed using real-time qPCR. Subsequently, predicted targets for the microRNAs were searched for in miRBase.

Results of the unsupervised analysis indicate that the primary factor separating the samples is the metastasis status. Predicted targets for microRNAs differentially expressed in the metastatic vs. non-metastatic group are mostly engaged in cell cycle regulation, cell differentiation and DNA-damage repair. On the other hand, the supervised analysis reveals clusters of differentially expressed microRNAs unique for the tumour type, malignancy grade and metastasis factor.

The most significant difference in microRNA expression was observed between the metastatic and non-metastatic group, which suggests a more important role of microRNAs in the metastasis process than in the malignant transformation. Moreover, the differentially expressed microRNAs constitute potential metastasis markers. However, validation of cfa-miR-144, cfa-miR-32 and cfa-miR-374a levels in blood samples did not follow changes observed in the non-metastatic and metastatic tumours.

Eva Hellmén
Professor at the Department of  Anatomy, Physiology and Biochemistry  (AFB); Division of Anatomy and Physiology