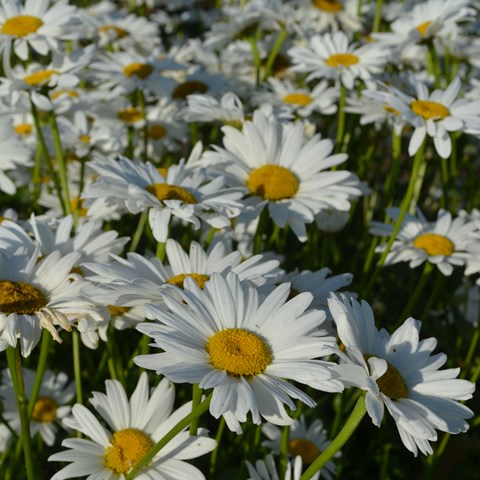 Description:
A Shasta daisy with a long flowering period and up to 10 cm large flowers.

Bloom time: In the sunny position on the trial field at the Swedish University of Agricultural Sciences outside Alnarp, in the south of Sweden, the flowering starts in late June. If the plants are deadheaded, it continues well into autumn.

History:
The Shasta daisy ‘Bröllopsgåvan' (the Wedding Gift) grows in the village Klagstorp in Scania, but can be traced to Slimminge 10 kilometres away. The Shasta daisy has been handed down from woman to woman in the same family for at least four generations. Marit, who is growing it today, can trace it back to 1923. This year, the mother of Marit's mother-in-law got married. In connection with the wedding, she got the Shasta daisy from her mother in the family home in Slimminge outside Skurup. The newly married couple took the Shasta daisy to their new home outside the village of Östra Vemmenhög. In 1955, their daughter Gudrun moved to the village of Klagstorp and a division of the Shasta daisy moved with her. Forty years later, in 1996, she passed it on to her daughter-in-law Marit, who later wrote a letter to the call for perennials and told the story behind the plant. The fact that she got a division of the Shasta daisy follows the tradition in the family. Marit's mother-in-law Gudrun tells us that when someone in the family moves to a new home, they are presented with their own division of the plant. The Shasta daisy has also been used for birthday celebrations and as long as her mother lived, Gudrun was always given a bouquet of Shasta daisies on her birthday in the middle of summer.

Collected in:
Klagstorp in Scania in the south of Sweden.

How to grow Shasta daisy:

Shasta daisy thrives in a sunny location where the soil is fertile and well drained. The flowering period is extended if the plants are deadheaded.

Where can I see this variety in cultivation?

The variety can be seen in Landeriträdgården at Gothenburg Botanical Garden.

Sale: The variety can be purchased at nurseries and garden centres from spring 2013.

Poster: Here you can download a poster of the Shasta daisy ‘Bröllopsgåvan'. Poster

The Department of Landscape Architecture, Planning and Management, SLU linnea.oskarsson@slu.se

The Programme for Diversity of Cultivated Plants