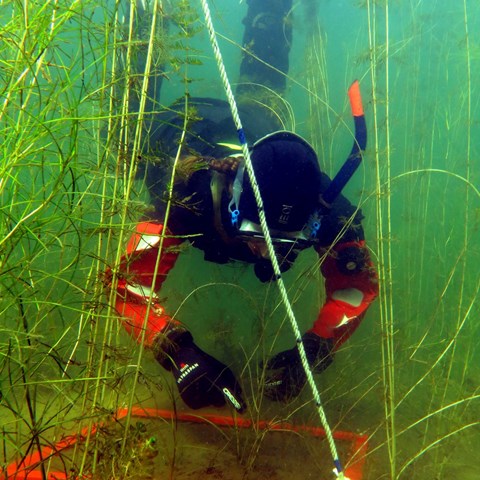 Along parts of the Baltic Sea coast, stocks of large predatory fish such as perch, pike and cod have decreased considerably in recent decades. Now, new results from a major ecosystem study show that strong stocks of predatory fish reduce the amount of filamentous algae and favor large aquatic vegetation, thus contributing to healthy coastal habitats that are important for many species as well as humans. The study highlights the role of large fish for ecosystem functioning and brings forward the possibility of strengthening stocks of predatory fish to counteract negative effects of eutrophication, such as blooms of filamentous algae and oxygen depletion.

The amount of bloom-forming filamentous algae has for a long time increased in Baltic Sea coastal waters as a consequence of eutrophication, the excessive enrichment of nutrients in the water. This has caused, in several areas, a deterioration of the water quality and large aquatic vegetation, which form the underwater forests that provide habitat to many organisms and are key to maintain clear waters.

"Based on earlier experiments we have suspected that large predatory fish can have a positive influence on aquatic vegetation and potentially reduce symptoms of eutrophication in Baltic Sea coastal areas. In this study we can finally demonstrate that this happens out in nature and is pervasive along the coast of the Swedish Baltic Sea, and we also provide the how" says Dr. Serena Donadi, the lead author of the study and researcher at the Department of Aquatic Resources at SLU.

Researchers from Stockholm University and the Swedish University of Agricultural Sciences (SLU) in Sweden, and Groningen University in The Netherlands conducted a large food-web survey covering 32 bays and inlets along the Swedish east coast. The study, which is published in Proceedings of the Royal Society B, was part of PlantFish, a 3-year project about bottom vegetation and large predatory fish in the coastal areas of the Baltic Sea.

The researchers found that the predatory fishes perch and pike, through predation, control the abundance of three-spined stickleback, a small fish that feeds on grazers that live in the vegetation, such as small crustaceans, insect larvae and snails. These grazers, in turn, eat filamentous algae that would otherwise compete with the larger vegetation at the bottom, forming the underwater forests that are home for many other species. Hence, as sticklebacks are eaten by predatory fish, there are indirect benefits to the bottom vegetation. This is what scientists call a trophic cascade. In summary:

"The more predatory fish, the less filamentous algae, the better the plants and the water quality" says Dr. Serena Donadi.

A key for unravelling these patterns was the inclusion of multiple spatial scales in the analyses. Different species perceive and use their surrounding habitats at different spatial scales, depending on how large they are and how far they move. For example, fish can swim kilometers in search of feeding and spawning habitats, while grazers move within tens of meters. Only when using a multiscale perspective Dr. Serena Donadi and her colleagues were able to identify and model all the links in the trophic cascade. But this is not all. The researchers also found that processes not only occur at different spatial scales, but also interact across scales.

"Even if they belong to different floors, the players can interact with each other to influence the final outcome of the game. The study provides an intriguing framework to better understand how species can affect each other in space and time. Based on our results, we believe that these interactions across multiple spatial scales can play an important role in both terrestrial and aquatic ecosystems around the world", says Dr. Serena Donadi.