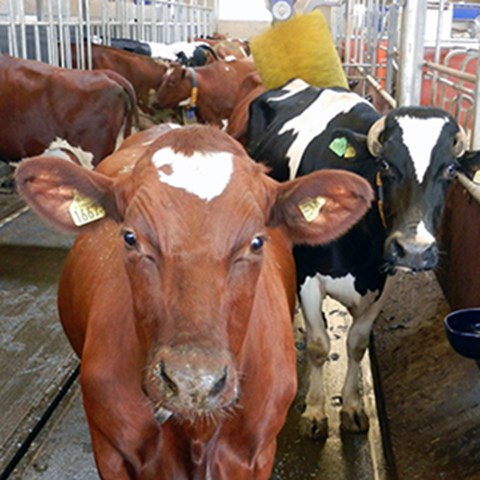 Cows in front of one of the mechanical rotating brushes that were available in the barn. The ear posture of the nearest cow is described in the protocol as “forward”, or “Ears are directed forward, with the tip of the ear at an angle of more than 30% from the perpendicular”. Photo: Daiana de Oliveira

Cows have different tail, neck and ear positions when standing in the dairy barn. These subtle differences are not directly related to the activity that a cow is performing at the time, but may be used as measures that reflect a cow’s level of arousal and how positive or negative she feels. Researchers from the Swedish University of Agricultural Sciences in Uppsala in a new study suggest that these small details may provide a window into the private lives of cows.

We can never really know what another person is feeling, but often we can make a good guess from their body posture, and we can sometimes put a name to these emotions, like anger or happiness. When it comes to animals this is not so easy, but also in animal husbandry we need to be able to judge how individuals are doing.

In animal welfare research, it is even crucial to be able to assess the wellbeing of animals, but the measures must be valid, reliable and comparable, and there is a lack of such measures when it comes to cattle. Daiana de Oliveira and Linda Keeling, from SLU's Department of Animal Environment and Health, suggest that welfare assessment would be much easier if one could use body language as a reliable indicator of how good or bad animals are feeling.

"People may think they are good at seeing how any animal feels, and perhaps they are, but until we have evidence of this we can't start to use this to assess animal welfare in a reliable and repeatable way", says Linda Keeling, Professor of Animal Welfare at SLU, who led a study which was recently published in the journal PLOS ONE.

What de Oliveira and Keeling did was to map body language with an approach used in human psychology, which involves mapping emotion according to two dimensions. The first dimension indicates how positive (or negative) the emotion is and the second how aroused the individual is. This makes no assumptions about what emotions animals may or may not experience, but is still useful in animal welfare research.

The researchers made over 3700 observations of the ear, tail and neck positions of 72 cows standing feeding at one of the roughage food bins, standing brushing themselves at one of the mechanical rotating brushes, or standing in the queue to go to the milking machine.

"When you do this many detailed observations of cows in their routine daily life you see many movements and postures that are not usually recorded. For example, cows almost only wagged their tails when they were using the mechanical rotating brush. In dogs tail wagging is often associated with a positive state, but is hardly ever mentioned when it comes to cows", says Daiana de Oliveira.

In this study, the body language of cows was classified according to six different ear postures, four neck postures and five tail behaviours. Using a statistical method called principle component analysis, all observations of body postures were analysed together. When all observations had been plotted into the two-dimensional graph, with one axis for the degree of arousal and one for valence (positive / negative), the three routine activities were clearly separated. Cows being brushed were grouped in one way based on their body postures, while cows that queued or ate were grouped differently.

"That cows experience feeding and brushing in a positive way corresponds with previous work. That queuing seems to be experienced negatively by cows was however new, and that it seems to involve both moments of high and low arousal", says Linda Keeling.

The most important contribution of the study is probably that it shows the contexts in which one can see specific body postures, but the overall analysis also leads the researchers to some other interesting predictions. For example that having the right ear back and the left ear forward is associated with a more positive state than having the right ear forward and the left ear back. Such a finding is in keeping with other studies on lateralisation in the brain that suggests the left side of the brain is usually associated with positive emotions. The left side of the brain controls the right side of the body.

By mapping the body language of cows during daily routines, de Oliveira and Keeling have laid the foundation for a scientific way of identifying and evaluating body postures that reflect how positive or negative cows experience other activities or situations, and how calm or excited they are.

"We see our study as a first step towards a reliable way of describing the emotional state of cattle and we also believe that the method can easily be adapted to the study of feelings in other species", says Daiana de Oliveira.

The work was funded by the Swedish research council Formas and was carried out within the Centre of Excellent in Animal Welfare Science, a collaborative research environment where one of the aims is to identify reliable indicators of animal welfare.

Cows in front of one of the mechanical rotating brushes that were available in the barn. The ear posture of the nearest cow is described in the protocol as "forward", or "Ears are directed forward, with the tip of the ear at an angle of more than 30% from the perpendicular". Photo: Daiana de Oliveira

Simplified chart showing how the "body language profile" (ears, neck and tail) of a dairy cow varies depending on whether the animal is being brushed, eating or standing in a milking queue in a barn. Illustration: SLU